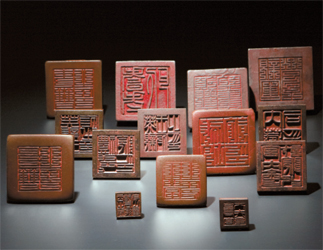 At the National Palace Museum of Korea, a special exhibition of old government seals kicked off yesterday. Provided by the museum

Today many people worry that paper is becoming like an endangered species. After all, these days people use computer word processing programs and the Internet to make official documents, send letters and holiday cards and read the news.

Back in the days when paper was still the primary tool for communication, just as important as what was on the paper was the seal on it. Now that we use signatures, it’s hard to imagine that a seal was what made a document official.

Koreans have long used seals for official documents, but they are usually seen only after they’ve been rolled in red ink and pressed into a piece of paper.

That, however, will not be the case at the National Palace Museum of Korea, where a special exhibition on old government seals kicked off yesterday. Officials at the museum call it the first exhibition to deal exclusively with government seals.

To those who don’t think much about the seals - or even those who think they all look the same - curator Kim Yeon-soo has this to say, “Some may think that the topic is too difficult and profound, but those with slightest interest in history will certainly get something out of this exhibition because seals and sealed documents played a key role in Korean history. And even if you’re not into history, you will get a glimpse of royal, palace life, which almost always fascinates people,” Kim said.

Since opening in 2005, the National Palace Museum of Korea has hosted a permanent exhibition on life in Korea’s palaces at the time of the Joseon Dynasty (1392-1910). In addition to that, the museum has organized a total of nine special exhibitions so far, with museum officials choosing one on royal patterns and decorations from earlier this year as particularly successful.

While museum officials admit that the exhibition on seals may not be as interactive or exciting as previous exhibitions, they value the time and efforts that went into creating it.

According to Kim, the museum has spent the last several years collecting the seals and related documents displayed in the exhibition, and it was a difficult job because they were scattered across the country. Their efforts turned up 160 seals used in 71 Joseon-era government organizations. Of those, the ones that were the most used, and the ones that are subsequently the most worn, are those from the organizations called ijo and hojo. Ijo was an organization that oversaw the recruitment of government officials and hojo dealt with finance.

The documents on display here reveal the importance of the seals. Some of the documents even have clauses saying that “anyone who tries to forfeit the seals will be beheaded and their family members sold as slaves.” hkim@joongang.co.kr