Call it a comeback: Makgeolli in favor once again

Call it a comeback: Makgeolli in favor once again 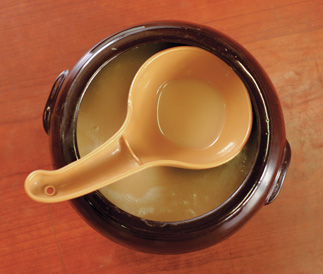 In the realm of alcoholic beverages, beer and soju have long served as the everyday drinks of choice for many Koreans, followed closely by whiskey for special occasions.

Now, however, you’re just as likely to see a bowl or cup filled with milky-white makgeolli, a traditional rice wine, on the dinner tables of many natives and expats alike.

Makgeolli is making a solid comeback in Korea after falling out of favor over the past few decades, elbowing its way into fancy hotels and upscale department stores in addition to the small local joints where it’s been served for years.

The drink, which was once popular among poor writers, has a deep history that dates back hundreds of years. Makgeolli was first cited in documentary records during the Goryeo Dynasty (918-1392). But its roots likely go back much further: Both the “Samguk Yusa” and “Samguksagi,” history books written during the Goryeo era, mentioned liquors similar to makgeolli that were produced during the Three Kingdoms Period (B.C. 57 - A.D. 676).

The word makgeolli comes from a Korean expression meaning “roughly filtered.” It was also once called takju (cloudy liquor) for its white and opaque color.

It reached the height of its popularity from the Japanese occupation in the first half of the 20th century through the late 1970s, making up 80 percent of all alcohol consumption. But it soon took a backseat to other beverages such as beer, soju and sake. Consumption plummeted from 700,000 bottles a day to just 100,000 in the early 1980s, in part because the offerings at the time were relatively low in quality compared to other alcoholic beverages.

Makgeolli, however, is now back in fashion among the drinking set in Korea, with sales amounting to 250 billion won ($208.7 million) a year. Consider this: From July through September, Lotte department stores sold more bottles of makgeolli than beer, coming in behind wine and whiskey. At Hyundai department stores, sales of makgeolli exceeded those of imported beer and even soju. It’s a huge spike from a year ago, when the retailer sold just two or three bottles of makgeolli a day per store. Today, daily sales amount to between 150 and 200 bottles. Exports are also on the increase. A total of 4,380 tons of makgeolli were shipped overseas from January through September, amounting to $3.6 million. That represents a 24.1 percent spike from a year earlier. Japan, where makgeolli is enjoying huge popularity, absorbs 86.8 percent of Korea’s makgeolli exports.

“Even in the trendy streets of Shinjuku in Tokyo, makgeolli bars have opened up recently,” Yasushi Hatta, a 33-year-old Japanese food columnist who published a book on Korean foods, said in an e-mail interview. “There are not only makgeolli cocktails but also fruit makgeolli. Now the Japanese are enjoying draft makgeolli, which is popular for its pungent taste.”

The rice wine is also finding a foothold, albeit a small one, in the United States, China and Australia. Seoul Tak-ju sells the drink in 10 different countries, while some airline flights between Korea and Japan began offering makgeolli produced by the Kooksoondang Brewery Co. starting in early October.

“Seventeen years ago, when makgeolli was shunned by Korean consumers, we tried to find a breakthrough in the Japanese market,” said Ha Myeong-hee, chief executive officer of E-dong Rice Wine. “Our company’s sales started growing 20 to 30 percent every year due to the Korea-Japan World Cup in 2002 and the Korean wave.”

Makgeolli still has a long way to climb to regain its former status in Korea. Rice wine, including makgeolli, accounts for only 3.6 percent of the entire alcoholic beverage market here. If the current craze continues, though, that could change quickly. The Korean government also intends to subsidize 133 billion won to makers of traditional wines in the next five years, which could further help boost the popularity of this traditional drink.

A lifetime in rice wine

At 72, Lee Dong-su, the chief executive officer of Seoul Tak-ju, seems exceedingly energetic for his age. And with good reason: Seoul Tak-ju’s sales jumped 50 percent this year compared to 2008, far surpassing the typical annual increases of 10 percent to 15 percent that the company has seen since 2000.

Lee, who has been in his current position since 1988, spoke with the JoongAng Ilbo at the company’s headquarters in Mangwon-dong, Mapo District, in Seoul to talk about the resurgence of makgeolli and efforts to globalize the drink.

Q. What do you think about the makgeolli fever sweeping the country?

A. My life has revolved around makgeolli for a long time, and I can say that I’ve never seen a time when it’s been so popular. At a recent seminar, 800 people participated in a toast with our Jang Soo brand of makgeolli. I was also invited to see President Lee Myung-bak as a representative of the makgeolli industry.


Do you have plans to globalize the drink?

If makgeolli makers want to go abroad, they should invest a lot of money in doing so. They should select a type of makgeolli that they are going to export and then concentrate their efforts on it. Mass manufacturing is possible only when production is fully automated. Along these lines, we are building a new factory in Jincheon County, North Chungcheong, where we intend to produce both traditional and modern makgeolli. The factory will be a step toward increasing exports.


Is there a new product in the pipeline?

We are developing ginseng makgeolli. There is nothing that goes better with rice than ginseng.


What should the government do to globalize makgeolli?

The Ministry of Food, Agriculture, Forestry and Fisheries held a traditional wine tasting event and did not invite us. The ministry only invited makgeolli makers that use domestic rice. We are consuming 16,000 tons of imported rice a year, which accounts for 5 percent of the total imported rice. The government should give us a medal.

Bae Jung-ho, the chief executive officer of Kooksoondang Brewery Co., can talk endlessly about the allure of makgeolli. He characterizes it as an indigenous liquor and even says that Koreans have makgeolli in their DNA. The 56-year-old executive recently spoke with the JoongAng Ilbo at the company’s headquarters in central Seoul, where he touched on an unsuccessful attempt in 1992 to sell canned pasteurized makgeolli and the current state of the drink.

Q. Why do you think the canned makgeolli failed?

A. At that time, we produced makgeolli in the city of Namyangju, Gyeonggi, but under the law the company was not allowed to sell its makgeolli in other regions. Until 2000, makgeolli could be sold only in the respective areas where it was made. We tried to change the law but we didn’t succeed. We also tried to export makgeolli, but it was difficult because foreigners were not familiar with it.


More than 10 years have passed since then, and makgeolli is now gaining popularity in Japan and other countries. What are your thoughts on this?

I have always tried to promote the benefits of makgeolli, but I never expected that it would become so popular. Sales of draft makgeolli have even surpassed that of Bek Se Ju [one of Kooksoondang’s major products] in both volume and revenue.


What are the benefits of makgeolli?

Rice is a staple food in the Korean diet. Rice-related micro-organisms live in Koreans’ digestive organs. They are very similar to the lactic bacteria, yeast and micro-organisms in draft makgeolli. In other words there are a lot of fibers and nutrients in makgeolli. It fits Koreans’ physical composition.


It is possible to globalize makgeolli?

Makgeolli is a unique drink, and it can become an alcoholic beverage loved by people across the world. We need to abolish the perception that makgeolli is cheap. There needs to be a diverse range of it in terms of price and taste. We shouldn’t just sell products, but also the culture. If our foods become popular in other countries, so will our drinks.