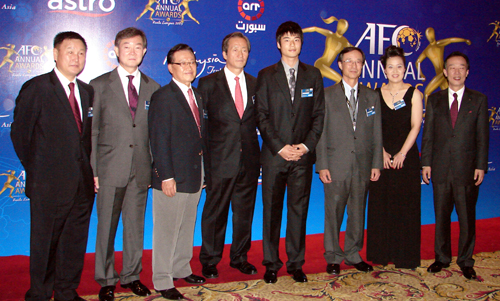 Korean football dominated the AFC Annual Awards at the Shangri-la Hotel in Kuala Lumpur, Malaysia on Tuesday, taking the national team of the year award. Huh Jung-moo became the first Korean squad manager in six years to win AFC Manager of the Year, while the Pohang Steelers was named the Club of the Year and Ki Sung-yeung bagged the young player of the year honor for best player under age 21.
Huh led Korea to its seventh consecutive spot in the World Cup and managed the team to a 27-game unbeaten streak, 14 wins and 13 ties, along the way. Korea boasted strong play in 2009, losing its first match in 22 months to Serbia, 1-0, on Nov. 18.

“I believe the players who followed the coaching staff and the support of football fans were the reasons for our seventh consecutive qualification for the World Cup. I want to thank the players, fans and KFA officials for their hard work this year,” Huh said in a statement through the Korean Football Association.
Huh was nominated for the award along with North Korean manager Kim Jung-hoon, who led North Korea to the World Cup for the first time since the 1966 World Cup in England, and Takeshi Okada, who led Japan to its fourth consecutive World Cup qualification. 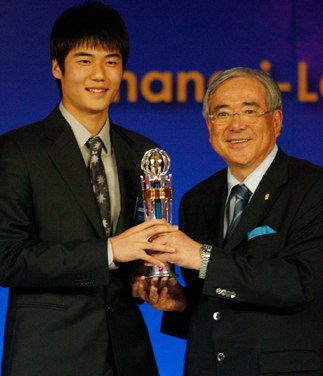 Ki was selected by Huh for the national team in September 2008 and has since scored four goals in 17 appearances. He was a major part of the FC Seoul club, which finished third overall in the K-League’s regular season and reached the quarterfinals of the AFC Champions League. Having since signed on with Celtic FC in the Scottish Premier League, Ki is set to join his new club in January.

The AFC Champions League winners the Pohang Steelers were awarded club of the year. Having finished second overall in the K-League regular season, Pohang will play the winner of the semifinal match between the Seongnam Ilhwa Chunma and the Chunnam Dragons on Sunday. Another Korean, Hong Eun-ah, received the AFC referee award for women.