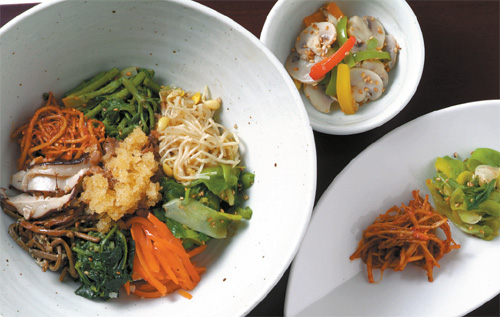 Bibimbap, above, was one of the six main dishes served to South Korean President Lee Myung-bak and U.S. President Barack Obama at their summit last week. Provided by the hotel

When First Lady Kim Yoon-ok recently invited hallyu (Korean wave) star Bae Yong-joon to the Blue House for tea, the topic of their conversation was food, specifically, the globalization of hansik (traditional Korean cuisine). It was a natural conversation for both figures, who are avid promoters of Korean culture. It was also the perfect opportunity for Kim to solicit Bae’s advice on which dishes should be served for U.S. President Barack Obama’s luncheon with South Korean President Lee Myung-bak in Seoul last Thursday.

Food can be used as a form of diplomacy, and officials say they used the recent summit as an opportunity to promote Korean food.

The dishes that were eventually selected for the first and only luncheon Obama attended during his less than 24-hour stay in Seoul must have been a hit with the U.S. president, because he was heard to have said throughout the meal that it was “delicious.”

The menu for the full-course traditional Korean meal served to the 20 South Korean and U.S. officials who attended the luncheon that day was extravagant and presented in the Korean tradition. 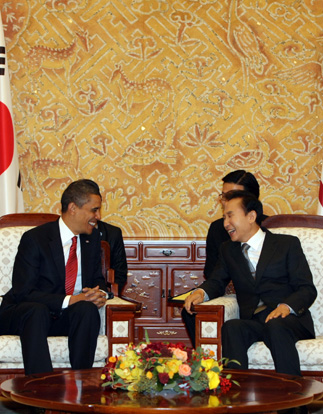 Foreign Ministry and Blue House officials participated in creating the menu, and the final selections were made by President Lee and First Lady Kim.

Of the dishes served, Obama seemed especially fond of the assorted spinach and the peanut ice cream, Chun Duk-sang, head chef at Mugunghwa, the Lotte Hotel’s Korean restaurant, said. Chun is one of the chefs from the hotel’s culinary team that created the final menu under the direction of Lee Byung-woo, the hotel’s executive chef. 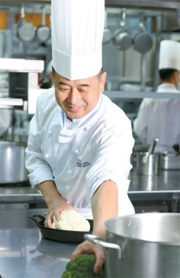 “It was a relatively short lunch, but the tastes will linger for a long time,” the chef said, recalling last week’s lunch, for which he and the culinary team started work at 4 in the morning.

Chun and his team began by going to Noryangjin Fish Market, Korea’s largest fisheries wholesale market, located in Seoul, to select fresh seafood such as lobster and scallops, which sources said were foods Obama likes. Then the team packed up the cooking utensils and other ingredients and put them in the 10-ton truck that eventually took them to the Blue House.

“We often prepare banquets for important events or summits like the recent one,” the chef said. “There is only a refrigerator and a gas range at the Blue House, so we have to take the rest, including knives and napkins, to the Blue House with us.”

The culinary team usually brings its own china and serving dishes as well, but the Blue House decided to use its own traditional dishes.

“Preparing for the recent summit was one of our most important events ever,” Chun said, noting that they only used the best ingredients.

“At most summits, it is rare for leaders to ask for a second serving of a particular dish, but this time they asked for more bulgogi,” the chef said. “It was so popular that we almost ran out of it.”

Fortunately, the team had prepared double the amount necessary, just in case.

The chef also said he used mild vegetables to make the bibimbap, such as gosari (fern brake), while avoiding vegetables with a strong flavor.

Sinseollo, which according to the chef was one of the dishes the first lady had selected that morning, was also popular among the assembled guests.

At first, the team hadn’t considered serving the dish but the weather was chilly that morning and the first lady said it would be better to serve the guests something warm. They had considered serving japchae, but there was a risk that the noodles would turn cold during the meal.

Lest Michelle Obama feel left out, First Lady Kim sent her counterpart a cookbook titled “A Book of Korean Recipes” compiled by the Institute of Traditional Korean Food.