A fitting price for world’s most famous mitten

A fitting price for world’s most famous mitten 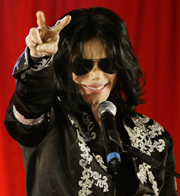 Michael Jackson’s glove was sold off at a hefty sum of $350,000 to a Hong Kong hotel executive.

At a memorabilia auction in New York last Saturday, the glove surpassed its pre-sale estimate of $50,000, earning the title of the “Holy Grail of Michael Jackson.” It was worn by the King of Pop at his very first performance of his now famous moonwalk on the 1983 Motown 25 television special.

The glove is decorated with Swarovski crystals and was originally created as a golf accessory made in Korea.

The auction included 80 of Jackson’s most treasured items, selling for 10 to 20 times their estimate.

Another highlight was the black, strap and zipper-laden jacket MJ wore during the 1989 “Bad” tour, which soared to $225,000, more than 20 times its estimate.