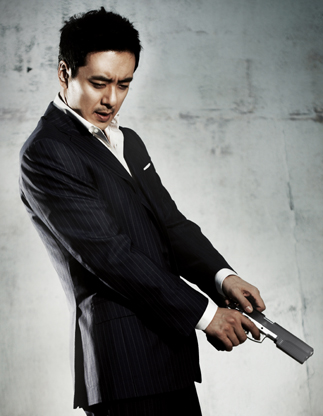 In the blockbuster drama ‘Iris,’ Kim Seung-woo plays the role of Park Cheol-young, a high-ranking North Korean agent. Kim, who has had a 20-year career as an actor, is hoping the role will allow him to stretch his boundaries as an artist. Provided by KBS

By Chung Kang-hyun
It has been 20 years since actor Kim Seung-woo took up a career as an actor. He turned 40 this year, which means that he has lived half his life in the profession. In the meantime, Kim, who made his debut with the Korean action movie “The General’s Son” in 1990, has since grown into quite a heavyweight in the Korean acting world.

It is a commonly accepted theory that those nearing the peak of their careers are more likely to fallㅅthan to keep rising. Indeed, Kim’s box office record has remained lackluster in recent years. However, instead of marching along on the same path that brought him fame, Kim put his career on the line when he joined the cast of the hit KBS-2 drama “Iris.”

In the drama, Kim plays the role of Park Cheol-young, a high-ranking North Korean agent. It’s not the lead, but a supporting role, which is unusual for him.

“Everybody around me dissuaded me from doing it, but I felt like I should take the part. I was confident that there would be something I could show through this role even if there were not many scenes in which I was featured,” Kim said. 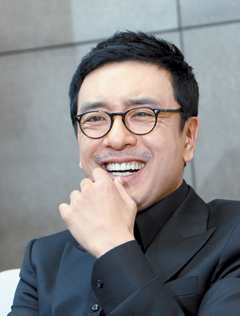 Kim may have faced the doubts of his colleagues, but there was one person who encouraged him to take the part - his wife, actress Kim Nam-joo, who told Kim that the role was attractive enough for him to take a chance.

Kim said that he also thought to himself that the role would help him break away from the good guy roles he has played for the last 20 years. The character of the cool-headed and charismatic bad guy Park Cheol-young proved to be just the right choice for him.

“Iris is surely a turning point in my 20-year acting career. I’ve never played such a strong character before, and for that reason, I have had to do my best to pull it off,” he said.

Kim’s leap into the unknown mirrors a similar move taken by his wife, who also went against type to play the starring role in the hit drama “Queen of Housewives.” In the drama, Kim plays the role of Cheon Ji-ae, the wife of a businessman who does whatever it takes to make her husband a success so that she, too, can reap the rewards. The role helped revive Kim Nam-joo’s career.

“It was rather risky for Nam-joo to play Cheon Ji-ae, which was a totally different character from the roles she had played in the past, but she did it,” Kim said. “That goes for me, too. Iris is a challenge for me but I’m doing my very best and it feels good to hear compliments that I’m succeeding.”

After playing Park in Iris, Kim won newfound adoration from fans who say they are impressed by Kim’s powerful performance in the drama and his “explosive charisma.”

The secret to Kim’s success, he says, has been hard work.

“I did a thorough examination of the way North Korean power elites behave,” Kim said, adding that he was even tutored by a North Korean official who had defected to the South.

Now that Kim has experienced a renaissance of sorts, it seems that he will continue to work toward his long-held dream of following in the footsteps of Ahn Sung-ki, who is regarded by many of his peers as an accomplished actor.

“As an actor, I’d like to walk a single path just as Ahn has been doing,” Kim said.

Considering his unrelenting drive to succeed, and his performance in Iris, Kim’s goals seem well within reach.