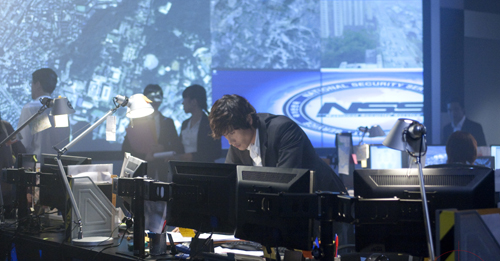 Iris, an espionage/action TV series, quickly became popular after its premiere for its fast-paced scenes that incorporate high-tech devices and weaponry, an A-list cast and a well-made plot. Provided by Filmmarketing Vidan

“Iris” is the sleek new espionage/action drama that’s had viewers glued to their TV sets since it began airing on Oct. 14 at 9:55 p.m. Wednesdays and Thursdays on KBS-2.

Although the show’s blockbuster status can partially be attributed to its 20 billion won ($17.3 million) budget, that doesn’t tell the entire story. There have been plenty of TV dramas with equally big budgets that have failed.

The biggest attraction for the Iris audience seems to be the spectacle the drama presents. As one of the few Korean dramas with a plot focused on espionage, Iris is a rarity.

“We tried to lend as much realism as possible to the drama by using replicas of the weapons and equipment that are actually used in intelligence wars,” a member of the production crew said in an earlier interview.

The drama series also features explosive action scenes with high-tech special effects that other local television dramas have not yet dared to try. For example, one chase scene uses satellite tracking technology to follow the characters. The show’s pace is also part of the appeal. The transition time between sequences is sometimes no more than two seconds.

Overall, Iris seems to have earned its blockbuster status. The show set a record last week with an audience share of 34.1 percent for its 12th episode, which was aired on Thursday, according to a survey conducted by TNS Media.

The drama’s A-list cast, including actors Lee Byung-hun, Kim Tae-hee and Kim Seung-woo, has played a decisive role in grabbing viewer attention. Lee in particular has gained a following by doing the dangerous stuff himself, including scenes with explosives and car crashes, rather than using a stuntman.

The drama’s subject matter has also proven to be a gripping element in the show’s success. The plot centers on the nuclear situation on the Korean Peninsula and imagines the impending reunification of the two Koreas.

There is also an absorbing subplot involving the romantic entanglements of the main characters that succeeds in conveying the delicate emotions of those involved.

That could explain why Iris has drawn more female fans than males, even though it was created as an action series geared toward male viewers. A recent survey found that among the total number of female television viewers in the nation, 12.4 percent watch Iris, while 8.7 percent of the total number of male television viewers in the nation watch the show. Surprisingly, the largest group of people watching Iris is women in their 50s, at 17.3 percent.

Meanwhile, 59 percent of the show’s viewing audience was reported to be female and 41 percent was male.