Jang aims for a 4th title at weight lifting championship

Jang aims for a 4th title at weight lifting championship 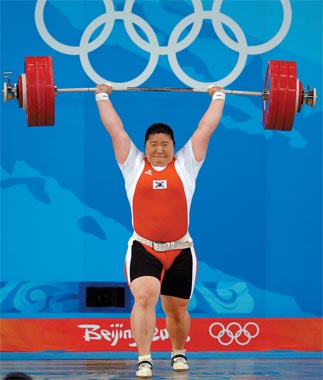 Jang Mi-ran attempts to clear 186 kilograms at the Beijing Olympics. She broke the world record by lifting 183 kilograms in the clean and jerk competition. [JoongAng Ilbo]

Olympic gold medalist and three-time world champ Jang Mi-ran will be vying for her fourth consecutive world title on Saturday in the +75 kilogram division at the IWF World Weightlifting Championships.

The 26-year-old world record holder, who will make the attempt on the record on Saturday evening in Goyang, Gyeonggi, is the clear favorite again this year. She set new world records in both the snatch and the clean and jerk competitions. Jang cleared 140 kilograms in the snatch category while she successfully lifted 186 kilograms in the clean and jerk competition for a combined weight of 326 kilograms.

According to reports, Jang seemed to be in supreme shape at the overseas training camp in Japan in September. During the three-week session, Jang cleared 190 kilograms using the clean and jerk method, surpassing her world record by four kilograms.

Jang has also been training at the National Training Center in Taeneung, northern Seoul and is on target to meet her ideal competition weight of 118 kilograms.

Jang won her first major international competition at the 2005 IWF World Weightlifting Championships in Doha, Qatar. She went on to win the 2006 event at Santo Domingo, Dominican Republic and the 2007 event in Chiang Mai, Thailand. Jang won a silver medal at the 2004 Athens Olympics and bagged her first gold at the 2008 Beijing Olympics.

Meng Suping, 20, of China is expected to be one of the favorites in the division. Meng lifted 313 kilograms at a national competition last month. Lee Hui-sol, 20, of Korea will also compete on Saturday.