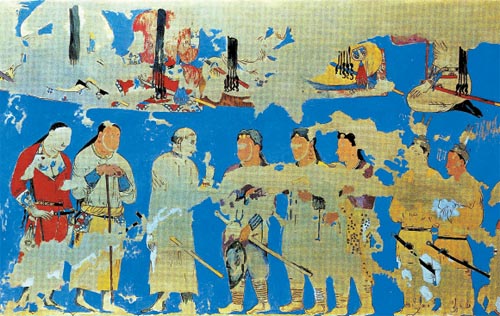 In most cases, replicas of ancient treasures or great works of art are treated with contempt. But with relics that are at risk of aging or disintegration, replicas can play an integral role in our understanding of the original works and the time in which they were made.

In 1965, a mural was discovered in Samarkand, Uzbekistan, when local authorities decided to build a road in the middle of the Afrasiab tepe. A tepe is a mound marking an ancient site, in this case pre-Mongol Samarkand.

When it was found, the mural was weathered and its images obscured. But those who discovered it had the foresight to make a drawing of it, from which replicas have been made.

A replica of this mural is now being shown as part of the exhibit “The Crossroads of Civilizations: The Asian Culture of Uzbekistan” until September of next year at the National Museum of Korea’s Asian Arts Gallery. The relics in the exhibition show the historical connection between ancient Korea and Uzbekistan through the Silk Road. Considering the distance and the travel routes in place at the time, the history of the relationship that developed between the two countries is indeed remarkable.

The mural is significant because it could prove that Korea sent envoys to Uzbekistan via the Silk Road as early as the 7th century.

In the 7th century, the mural covered all four walls of a room in Afrasiab Palace in Samarkand, with each wall depicting a different scene. The western wall depicts what are believed to be two Korean men from the Goguryeo Dynasty (37 B.C.-668) having an audience with the king.

“The faces of the delegates are difficult to see, but the painting features a clear image of a jougwan,” the press release said. A jougwan is a hat that was worn by the men of Goguryeo and is decorated with a bird’s feather.

The actual nationality of the two men in the painting was long debated by specialists, with some saying that their clothing shows they are from the Silla (57 B.C.-935) or Balhae (698-926) eras. With the revelation of the jougwan, however, many have concluded that the men are from the Goguryeo era.

The exhibition also displays 150 other relics from the prehistoric age to the 8th century in Uzbekistan, ranging from a Buddha with western features to a machine used by followers of Zoroastrianism, the first monotheistic religion, used to cremate the dead.

The museum is open 9 a.m. to 6 p.m. on weekdays and until 9 p.m. on Wednesdays and Saturdays. It is closed on Mondays. Admission is free. For more information, visit www.museum.go.kr.