Even Rain can’t save this dull tale of ninja killers

Even Rain can’t save this dull tale of ninja killers 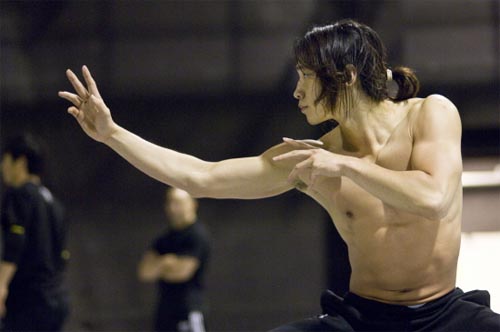 Rain’s role is to have rippling muscles and look angry in “Ninja Assassin.” [MovieWeb]

Real ninjas were nothing more than thugs and spies who did the dirty work of Japan’s feudal lords during the chaotic civil war of the 15th to 17th centuries. They could not disappear, they did not steal orphans and train them in secret, and they did not have Wolverine-like healing powers.

Real ninjas are boring. So instead, “Ninja Assassin” goes with the “real ultimate power” philosophy of ninjahood: that - ahem - ninjas are totally sweet, ninjas fight all the time, and the purpose of the ninja is to flip out and kill people.

Genre fans may associate the title with the English-dubbed “Shogun Assassin,” the bizarre and violent classic of samurai exploitation from 1980 that was hacked together from two different Japanese films. Perhaps that’s the feel writer Matthew Sand and director James McTeigue were going for, because the plot holes here are wide enough for 30 ninjas to hide in while having a really rad fight.

A gleefully violent opening sequence introduces us to Raizo, a ninja in the Ozunu clan played by the Korean pop star Rain in his first starring Hollywood role. The scene is like a checklist of genre staples - the ominous envelope of black sand, the arrogant young buck who gets what’s coming to him despite the warning of the wise old yakuza, the gory decapitations. Striking from the shadows, Raizo seems a little like Batman, except he bisects people’s shins. 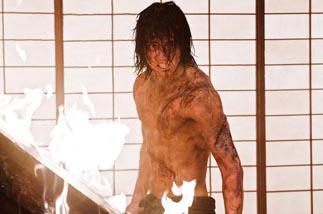 Rain’s role is to have rippling muscles and look angry in “Ninja Assassin.” [MovieWeb]

Then, all of a sudden, the action stops, and the first third of the movie dives into an utterly uninteresting series of flashbacks to Raizo’s ninja upbringing at a mountain temple by Lord Ozunu (Sho Kosugi), broken up by footage of Rain twirling around in a Berlin apartment, his ample musculature dripping with grease. This was when Ninja Assassin lost me. I can handle a threadbare plot in the service of awesome action. But why spend 25 minutes developing characters who really are nothing more than excuses to show more flying organs? The stilted romance between various younger Raizos (none of whom look anything like Rain, by the way) and a ninja girl only makes the plot deficiencies more obvious and unbearable.

Back in the present, Raizo is on the run from his clan and has to enlist sexy Europol agent Mika (Naomie Harris) and her boss (Ben Miles) to help him get revenge against Lord Ozunu. The cops have just begun to crack the case of the ninja clans when their superiors (presumably influenced by Ozunu) betray them and capture Raizo. Then Ozunu sends wave after wave of minions into the prison to kill the traitor. This raises two issues: An organization does not stay totally secret for 1,000 years by indiscriminately killing cops and causing car crashes. And if Ozunu is pulling the strings at Europol, why bother sending the ninjas at all? Couldn’t he use his connections to make it look like an accident? Not even the fairly cool climactic fight in a burning ninja village could rid my mind of these questions (and the Jedi twaddle Ozunu murmurs every few minutes didn’t help).

Of course, none of this matters. Because Rain is in it, Ninja Assassin will do good business here, and the filmmakers know it, inserting a little reference to the assassination of Queen
Myeongseong by Japanese agents and setting a battle in a Korean laundromat in Berlin.

There’s also a clever and surely intentional nationalistic undercurrent. Though Rain’s character is Japanese, he is a Korean celebrity, and watching him cut up yakuza and ninjas for 90 minutes has to increase the movie’s appeal here while not hurting its chances elsewhere.

But I’m grasping at poison dart blowers for something interesting to say about this movie, which manages to use the same premise as “Kill Bill Vol. 1” and still be dull. It’s a sad day when even a film called Ninja Assassin fails to get one totally pumped.