Thriller lays bare the secrets that we keep

Thriller lays bare the secrets that we keep 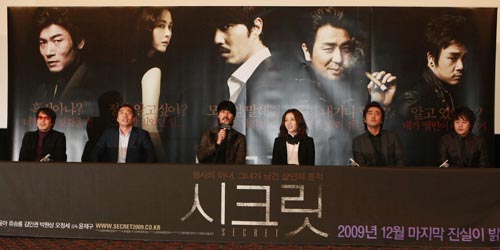 “Secret,” a Korean thriller that will be released next week, is already drawing attention for the fact that it was written and directed by Yoon Jae-gu, who wrote the script for the 2007 movie “Seven Days.”

The film is the screenwriter’s directorial debut, and the second in what is to be a four-part series revolving around the theme of “saving.” Seven Days, the first film in the series, received good reviews from critics and audiences and drew over 2 million viewers nationwide.

“Seven Days, which tells the story of a mother who saves her child from kidnapping, was the first in a four-part series under the theme of ‘saving’ that I’ve had on my mind,” Yoon said at a press event in Seoul last week. “Secret, which tells the story of a husband trying to save his wife in extreme circumstances, is the second in the series, while the third and fourth films in the series will deal with saving friends and saving the earth.”

Yoon noted, however, that the audience will be more likely sympathize with the first two films, which both involve a protagonist saving a family member, because it is a misfortune that could happen to anybody. 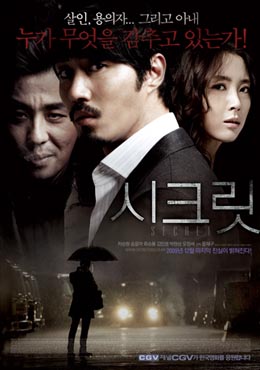 Secret revolves around a murder case in which the brother of a notorious gang leader is found after having been brutally killed. In his investigation of the crime scene, Detective Seong-yeol (Cha Seung-won) finds evidence indicating that his wife, Ji-yeon, (Song Yoon-a) is involved in the murder.

With the gang and police chasing after the killer, Seong-yeol tries to protect his wife, taking actions that conflict with his duty as the detective in charge of the case. In the process of searching for the truth, however, Seong-yeol finds himself in unexpected situations and discovers long-held secrets.

“I always think that a well-made movie comes from a well-written script,” Cha, who plays Seong-yeol, said. “Secret has such an in-depth script that I’m confident it will be a first-rate movie.”

Song, who plays the detective’s wife, shares Cha’s opinion. “I think Secret is a very ‘cinematic’ movie with a superb screenplay. It was a difficult task to express myself within such a well-made frame, but it was a great experience,” said Song.

Yoon underlined that although there are similarities between Seven Days and Secret, the two thrillers are different in terms of the complexity of the plot.

“While Seven Days was a thriller with a rather simple plot involving two parties - a kidnapper and the mother of the kidnapped child - Secret has a more complicated plot involving a detective who finds evidence of his wife at a crime scene and there are five other people wrapped up in the case,” Yoon said. “Each character has their own hidden cards to play, and only when all of the cards are assembled is the truth unveiled and the story complete.”

Actor Ryu Seung-ryong, who plays the villain Jaekal in the movie, shared his impressions of the film. “What I found impressive about this movie is the way it shows how people who are close, like a couple, for example, get to know each other better. What rings in my heart is not a particular scene or line, but the way the plot highlights the tug of war people go through when they are getting to know each other and how they come to understand what they mean to each other.”