Echoes of a colonial past

Echoes of a colonial past 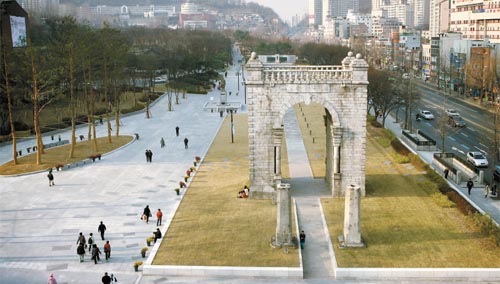 Independence Park in Seodaemun District, central Seoul, reopened recently after a year-long renovation. Now people are allowed to walk under the Gate of Independence. By Oh Sang-min

Independence Park in central Seoul is quite similar to most of its peers scattered across the city.

When the weather is nice you can find plenty of mothers pushing babies in strollers, seniors taking leisurely strolls and young couples walking about holding hands or gazing at each other while sitting on benches.

But look deeper and you’ll find that it is more than a tranquil oasis surrounded by concrete buildings. There’s a fair share of history - some of it a bit ghastly - here as well.

The park, located in Seodaemun District, is home to the Gate of Independence (Dongnimmun) and the Seodaemun Prison History Hall, where independence fighters were kept and tortured when Korea was under Japanese rule.

Together, these two sites help tell the turbulent modern history of the country.

Independence Park, which covers 109,193 square meters (27 acres), reopened late last month after a yearlong renovation by the Seoul city government. The 24 billion won ($20.8 million) project included the addition of water fountains, the replacement of a Japanese-style circular pond in front of the Patriotic Martyr Monument with one in the Korean style, and various other improvements. The city also purchased old buildings situated at the entrance and then annexed the land, which covers 3,800 square meters, into the park.

But the highlight of the remodeling project involves the Gate of Independence, which was long surrounded by a rusty old fence and therefore could only be appreciated from afar. The city decided to tear down that barrier, allowing people to pass under the impressive structure for the first time in modern history. The ground near the Gate of Independence was also leveled to make the structure more visible and accessible.

“The Gate of Independence was once a cultural relic that could only really be seen from a distance, but now it has become a historic symbol that people can embrace,” said Chu Chin-oh, a history professor at Sangmyung University. “It will give people who don’t know much about the gate a chance to become more aware of the story behind it.”

Despite what some locals think, the gate was not built to achieve independence from the Japanese; rather, it was erected to promote self-governance in a time when China exercised strong influence over Korea. With imperial powers hovering in the late 19th century, a number of enlightened scholars - led by Suhr Jae-phil - and government officials decided to demolish Yeongeunmun, a gate built to welcome Chinese envoys.

They then constructed the Gate of Independence at the site, which was roughly 70 meters (230 feet) southeast of the current location, using money raised from the public and the government. 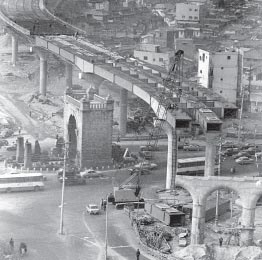 The Seongsan overpass was built over the gate at its original site. The gate was later moved 70 meters (230 feet) northwest to its current location. [JoongAng Photo]

The gate, finished in late 1897, was the first Western architectural structure in Korea. Built with white granite stones, the structure was modeled after the Arc de Triomphe in Paris - though it is much smaller, measuring 14.3 meters high and 11.5 meters wide.

The gate was built to recognize Korea’s freedom and send a message to China and other colonial powers that the people strongly valued their independence.

In the end, the country succumbed to a foreign power anyway. The gate, however, survived the Japanese occupation (1910-1945), though it was partially damaged during the Korean War (1950-1953). It moved to its current location in 1979 due to road construction. In 1992, Independence Park was formed at the site, part of an effort to recognize Korea’s painful past.

While Independence Gate is getting all the attention because of the renovation, the park features another key piece of Korea’s past in the form of the Seodaemun Prison History Hall.

The structure dates back to 1908, when the Japanese built a large prison to detain a number of independence fighters. It opened as Gyeongseong Prison, though its name was changed to Seodaemun Prison in 1923. 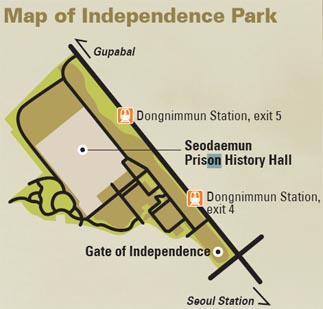 Korea continued to use it as a general prison after the country reclaimed its sovereignty in 1945. The prison then moved to Uiwang, Gyeonggi, in 1987, and the original buildings stood empty for years. The history hall opened to the public in 1998 and became a tourist attraction for both Korean and foreign visitors, including those from Japan.

There used to be 15 buildings at the site, but today only seven red brick structures remain. The 4.5-meter-high walls that once surrounded the prison were built in 1923, as were six watchtowers to prevent inmates from escaping. Only parts of the walls still exist today.

The prison was notorious not only for detaining independence fighters but also for torturing and executing them. All kinds of torture methods were used by the Japanese here. Some inmates, for example, were put into a wall coffin, which was too small and narrow for an adult to stand or sit in - meaning the inmates emerged nearly paralyzed. Electric shock, heated irons and water were all employed for torture as well. However, the biggest hardship they suffered was hunger, as many of the prisoners starved to death.

Visitors can actually go inside the cells and experience the conditions inmates were forced to live in. There is also an underground cell that was used to imprison female inmates including independence activist Ryu Gwan-sun, who was interrogated here and eventually died from malnourishment and torture.

Recent visitors to the park expressed mixed feelings about the renovation and the dynamic of the park in general.

Some said they are impressed, particularly by the Gate of Independence. 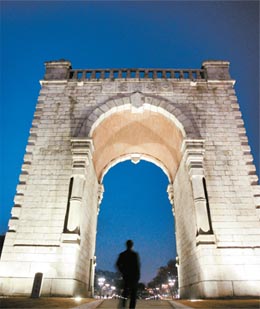 “I’ve seen it before in textbooks, but this is the first time that I’ve actually seen it up close,” Go Eun-bi, a high school senior from Uijeongbu, Gyeonggi, said during a recent visit. “It looks very nice after the renovation.”

Other observers, however, say that Independence Park has a mixed identity and that perhaps it should become more of a historical area.

“It is a good thing that the park became more accessible to the public, but people should realize that the gate and the Seodaemun prison don’t go well together since they were built in different time periods for different purposes,” said Hong Heon-il, head of Seodaemun Prison Original Restoration and Research, who has been urging Seoul officials to restore the prison. “It should be restored as a place to remember the painful past rather than a park.”