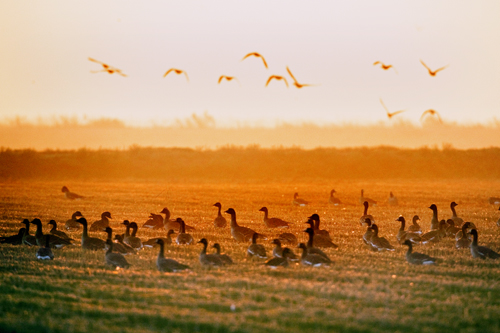 Amid the orange glow of dawn, geese start off the day hunting for breakfast. [JoongAng Ilbo]

Like clockwork, migratory birds descend on Korea as the days become dreary and overcast.

As winter approaches, the stillness in the morning air is frequently broken by the sounds of birds that have flown here over vast distances to find new homes for the next few months.

These are just some of the many types of migratory birds found in the wilds of Korea this time of year. 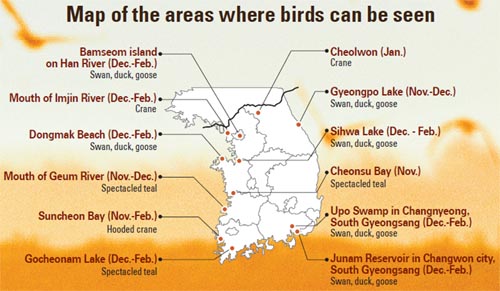 They come from the north in search of warmer climes, though of course Korea itself can get downright frigid during the winter season. Still, the weather here is much more tolerable than the frozen tundras where these birds originated.

Many Koreans hold a fair amount of adoration for the migratory birds, primarily for the powerful way they flap their wings. Just catching a glimpse of one soaring through the air can even be enough to overcome the cold and shake off the doldrums of winter.

So where can you find these spectacular birds?

Head for the coasts and riverbanks down south, as migratory birds - particularly spectacled teals, a type of duck - tend to nest in these areas in early winter.

Making the trek from distant Siberia in Russia, these birds arrive from late October to early November and build their homes in Cheonsu Bay near Seosan city, South Chungcheong.

When the weather takes a turn for the worse, they move down to the mouth of the Geum River in Gunsan city, North Jeolla.

During the coldest days of winter they fly further south toward Gocheonam Lake, which provides an ideal spot for bird-watching in January.

Some birds can only be seen in certain areas. Hooded cranes, for instance, flock to Suncheon Bay near Suncheon City, South Jeolla, while regular cranes nest in Cheolwon Plain, Gangwon.

How to see the birds:

To get a good view of the migratory birds - and to ensure you’re comfortable - you need to prepare ahead of time. The most important thing to remember is to dress warmly. It’s no fun standing out in the cold for hours on end if you’re freezing. Bring along gloves, a hat and a thick overcoat. You should also purchase a bird guide, which will make the whole adventure much more fun and exciting. The best time to see spectacled teals decorating the skies is during dawn and sunset, when you can see flocks flying in a V-shaped formation.

It is also important to note that these birds are not in a zoo for display, so you should make all efforts necessary to avoid disturbing their daily lives. Along these lines, there are a few rules to follow in order to avoid frightening the birds. First, clothes with primary colors should be avoided, especially red.

Inappropriate behavior is discouraged, and you are advised to turn off your cell phones. When watching these birds, it’s advisable that you strive to blend in with and become a part of your surroundings.