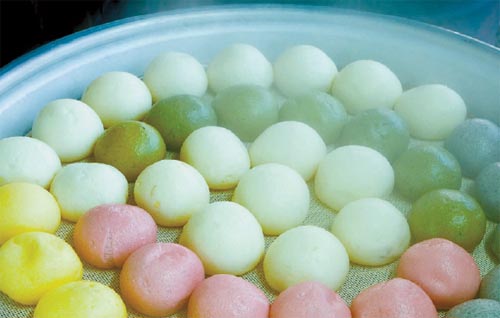 Hwangdun’s famous buns come in a variety of colors and have different fillings, including everything from red beans to sweet potatoes. By Kwon Hyuk-jae

While driving to the remote town of Hwangdun in Gangwon Province, one encounters large signs on restaurants touting locally made steamed buns.

These eateries entice many drivers to pull over and snack on the sweet treats, which are called jjinbbang. But the town doesn’t necessarily need to advertise: Hwangdun’s steamed buns have gained quite a following over the years.

The jjinbbang here are different from other versions served throughout Korea, and each of the nine eateries in Hwangdun that specialize in the buns offer tastes and flavors distinct from one another. The competition, as you can imagine, is fierce, as each establishment strives to create signature tastes that consumers will crave. The owners of the eateries are happy to expound on the differences in their recipes and explain exactly what it is that sets them apart from their rivals.

The steamed buns here often look the same, coming in various colors including white, yellow, pink, green, black and purple. But they are stuffed with different ingredients - everything from paprika, pine needles and purple sweet potatoes to sweet red beans, pumpkins and peas.

The makeup of the dough also varies. 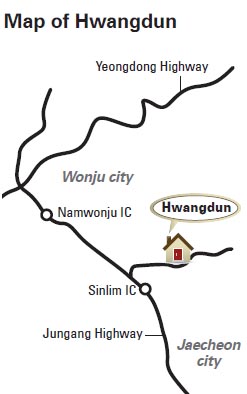 One version, for instance, might include ground up corn kernels, while others might use margarine and milk, glutinous starch syrup or even salt and sugar. Some are fermented using yeast or makgeolli, a type of traditional rice wine, or a combination of the two.

The most popular version is the whole steamed bun (modeum jjinbbang), which typically cost 500 won ($0.43) each. You can also often buy a set of 20 buns for around 10,000 won, which provides a better bargain since you can sample several different types.

Hwangdun steamed buns gained fame after a woman named Lee Geum-ye started selling her made-from-scratch versions in the corner of her clothing store in 1992.

The town provided a convenient pit stop for commuters, who started to pick some up on the way to and from work. As steamed buns started getting more popular, more of these eateries popped up in the neighborhood.

The taste of Hwangdun steamed buns became more distinctive thanks to Ha Mun-ho, the owner of Hwangdun Ssaljjinbbang. Ha, who was once a rice farmer, opened his store in 2001 and came up with the idea of making steamed buns with rice as a key ingredient. 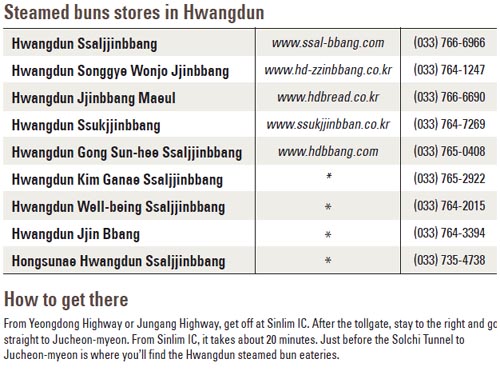 However, using 100 percent rice in the buns made the dough too sticky, so he decided to mix it with flour.

He became engrossed in the process and after six months found the perfect combination: 50 percent to 60 percent rice. This made the buns fluffy and enhanced their taste, yet the treats also maintained their structure and texture even after being put in the freezer. And they were microwaveable. He also realized that adding yeast and makgeolli made the dough rise.

Ha’s steamed rice buns became famous and other eateries started copying his general methods. In the 2000s, the steamed bun craze put Hwangdun on the map.

With the rapid spread of Internet access, the eateries are now selling and delivering their steamed buns all over Korea.