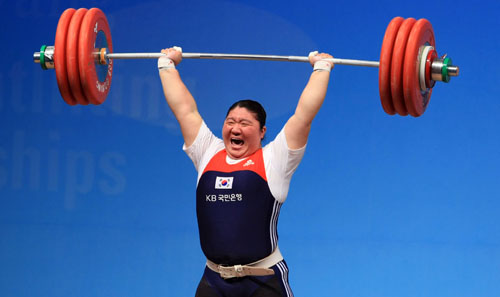 Jang Mi-ran sets a new world record in the clean and jerk competition by clearing 187 kilograms in the +75 kilograms division on her third attempt at the World Weightlifting Championships in Goyang, Gyeonggi, on Saturday. [YONHAP]

Jang Mi-ran further cemented her place as a dominating force in the women’s heavyweight class of weight lifting over the weekend. Jang set a new record in the clean and jerk competition en route to winning her fourth consecutive World Weightlifting Championships title at Kintex in Goyang, Gyeonggi, on Saturday.

Above all else, the 26-year-old was relieved to have completed the event on her home soil. After having won three consecutive world titles and a gold medal at the Beijing Olympics, Jang had her eyes on the Korea event. Jang looked nervous at the start of the competition and failed at her first attempts in both the clean and jerk and snatch competitions for the first time in her career.

“I was waiting for this time,” Jang said with a sigh of relief at the press conference. “I am happy to have won at the first World Championships held in Korea. As such, I felt a lot of pressure coming into the competition.”

Jang has now joined an exclusive club of female weight lifters who have won four consecutive World Championships. Since placing first at the 2005 World Championships in Doha, Qatar, she has won the annual event every year except in 2008, when the summer Olympics were held in Beijing, China. Jang won her first gold in Beijing and replaced the world record she won there in Goyang over the weekend.

Jang was impressive in the clean and jerk competition but came up a bit short in the snatch competition with 136 kg. The weight was two kilograms short of that lifted by Tatiana Kashirina, 18, of Russia. The snatch competition has not been Jang’s strong point in past years but Jang’s miscalculation played a crucial part in her second place finish in that event in Goyang.

“After clearing 135 kg on my second attempt, I mistakenly thought that I was the only competitor left before I attempted my third lift. I proceeded to lift 136 kg but Kashirina had one attempt remaining,” explained Jang. “That said, I have not improved much on my snatch record since the Beijing Olympics and 136 kg was not easy.”

In order to improve her snatch record at upcoming events, Jang and the national team coaching staff will attempt to borrow a few tricks from the training methods used by the Chinese national team.

Jang said she will take some time off to rest and will then redirect her focus to the 2012 London Olympics.

“I stated after the Beijing Olympics that I would compete until the 2012 Olympics but it’s not an easy process. I had a difficult time preparing for the World Championships this year and it only gets harder with each passing year,” stated Jang. “I’m sure new competitors will emerge but I will try not to pay attention to any of them and will focus solely on my goals.”

While Jang sees the challenges ahead as she prepares for international events, her head coach is confident about her chances at the 2012 London Olympics. Kim predicts she will win a gold medal and make a 200 kg lift in the clean and jerk competition.

“Jang is blessed with the physique, and is also strong mentally. If she continues to train at her current pace and without any injuries, the goal is definitely possible,” said Kim.