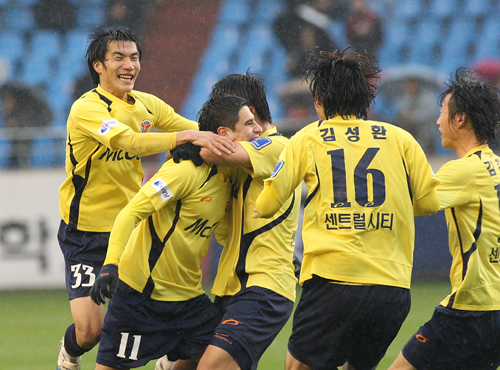 Mauricio Molina, second from left, is congratulated by his teammates after scoring the K-League Championship semifinals’ lone goal in the 44th minute at the Steelyard in Pohang, North Gyeongsang, yesterday. By Lee Ho-hyung

Seongnam Ilhwa Chunma’s impressive run in the postseason continued as rookie manager Shin Tae-yong and team achieved the improbable and defeated Pohang on their home field, 1-0, yesterday. Having already earned two wins and one tie against the Steelers this season, Seongnam was the only team that had not lost to Pohang this season. As promised, Shin broke the “Farias magic” (named for Steelers manager Sergio Farias) and handed Pohang their first loss at the Steelyard in Pohang, North Gyeongsang, in K-League Championship semifinal action yesterday.

“We came into enemy territory, and with 10 men we still beat our opponents. I want to applaud my players for their efforts,” Shin said to the press after the match. “If Jeonbuk Motors doesn’t take us seriously, we’ll take them to task.”

Seongnam will look to continue their improbable run to their eighth league title. Up next for the team is Jeonbuk Motors, which finished the regular season first overall. The finals will be at Seongnam, Gyeonggi on Dec. 2, and in Jeonju, North Jeolla, on Dec. 6.

Seongnam enters the finals with a good amount of momentum, having defeated Incheon United in the first round and the Chunnam Dragons in the second round, with both wins earned in penalty shoot-outs. The club had an impressive victory over Chunnam despite seeing two of their central defenders and Shin ejected.

The second-ranked Pohang pressed fourth-ranked Seongnam from the start, living up to its reputation of playing a fast-paced game. But things changed when Seongnam’s Mauricio Molina scored the opening goal in the 44th minute off a free kick. Molina had also scored the lone goal in the 1-0 win over Chunnam.

Pohang made desperate attempts to notch the equalizer in the second half, and came close a few times. They got a break in the 27th minute when Seongnam defender Jang Hak-young was ejected from the match in the 72nd minute for arguing a corner kick call.

Seongnam stuck to a defensive scheme with Dzenan Radoncic and Molina making the occasional surge into Pohang territory in the remaining minutes of the game. Pohang came close, but Seongnam held onto the lead to earn their upset victory.

Pohang were unbeatable at home this season and went into the game with a home record of 15 wins and nine ties. Having won the Peace Cup Korea, AFC Champions League and AFC Club of the Year titles, Pohang falls short of their goal of adding the league title to their accomplishments.

Also noticeable in the match was the large number of officials present. For the first time in K-League history, yesterday’s match featured six officials: one referee, two linesmen, one backup referee and two additional linesmen near the goal line. The six-man officiating crew will also be used in the finals.