After breakup, duo cares for their grief

After breakup, duo cares for their grief 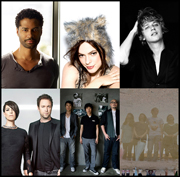 Irish singer-guitarist Glen Hansard and Czech singer-songwriter Marketa Irglova shot to stardom with their roles in the low-budget film “Once,” which was a sleeper hit in 2007 and later produced the best-selling soundtrack that garnered the duo an Academy Award for the song “Falling Slowly” in 2008.

The two artists won acclaim for their portrayals of two struggling musicians in the film but attracted an equal amount of interest for the romantic off-screen relationship that mirrored their on-screen love affair.

Fast forward to the present and the romance has ended, but the musical partnership that created their band The Swell Season has endured, and they released their second album “Strict Joy” last month.

Hansard, who is also the frontman for the Irish folk band The Frames, and Irglova, a classically trained musician, took time from their busy schedules to answer a few questions via e-mail. Following are excerpts from that interview.

Q. Glen, how does The Swell Season intersect with your musical ambitions?

A. What sort of happened is that [Marketa] has just been kind of adopted in The Frames … The Swell Season definitely isn’t The Frames, but the parallels are kind of blurred. As long as Mar is in the band, it is going to be called The Swell Season. That’s how I feel about it, because it’s so different without her presence. And without her presence, it goes back to being four lads.

Glen has talked about the influence of Dylan, Cohen and Van Morrison on his work. What has influenced you, Marketa?

Funnily enough, a lot of the same people. My dad was always a big music enthusiast, and there were plenty of records in our house. Mostly smuggled through the border, as my parents’ youth was spent in the communist regime that the Czech Republic was back then. My dad used to play me his favorite songs since my very early age. A lot of the time they would be Bob Dylan songs, Leonard Cohen songs, Simon and Garfunkel songs, played by Czech interpreters, singing Czech lyrics. That used to be the way people went around the regime back then. I used to like them, for they would be played at bedtime, and they were melodic, peaceful and lovely to fall asleep to. To this day, I still prefer singer-songwriters over rock bands.

There is a Czech singer-songwriter who is very respected in Czech named Karel Kryl. Unfortunately he is no longer with us, but his music lives on and continues to influence me.


What are you trying to say with this new album, Glen?

Like the Once songs and the songs of The Frames, this is an album that deals mainly with the theme of “relationship,” although not strictly with a romantic relationship, but of the relationship with one’s self, one’s friends, one’s band, one’s god, one’s country, and of course one’s lover. To refer to Strict Joy as a “breakup” record exclusively I think would be untrue, although it does play a part in the fabric of the songs. This new bunch of songs tries to find more hope or redemption in the idea of loss or sadness. As poet James Stephens [whose book “Strict Joy” inspired the album title] said: “By caring for our grief we cared our grief away/ The poet makes grief beautiful.”

Marketa , what would you like your listeners to take away with them?

I would like them to be inspired to create, whether that’s making music, painting, writing, or any other form of creating and sharing. I think the main purpose of all art is to elevate us to a higher place, and heighten our consciousness. I’d like our music to do that for people.