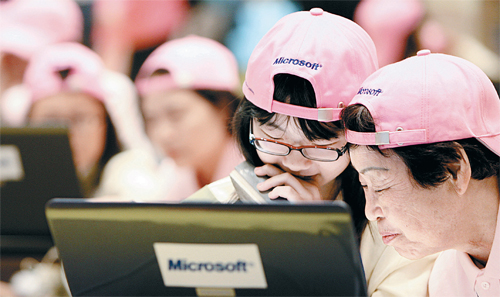 The younger generation in Korea is facing high unemployment coupled with problems created by the rapidly aging society and the record-low birthrate. Experts say the government should concentrate its efforts on creating jobs. [JoongAng Ilbo]

Every society has a generation gap. In South Korea, that gap has often revolved around political ideology, as the Korean Peninsula is still divided into North and South, a relic of the Cold War.

Nowadays, however, scholars say that the younger generation in South Korea - half a decade removed from the Korean War - is more interested in their own lives rather than in politics or ideology.

This has not only created an ideological rift between the generations, it is also likely to create problems for the younger generation as they struggle to support a population that is aging at a rate they will not be able to support.

According to a recent survey by the magazine Monthly JoongAng, 45.7 percent of the younger generation said they consider themselves “moderate,” 19.1 percent say they’re “conservative” and 34.3 percent are “liberal.” However, among the older generation, those who claimed they are conservative and moderate were on a par - 39.3 percent and 36.5 percent, respectively - with both groups outnumbering those who say they are liberal (21.4 percent).

“It is no longer viable to gauge the political inclinations of young people in Korea with the yardstick that we used in the past to divide conservatives and liberals,” said Kang Won-taek, professor of politics at Soongsil University.

Kang explained that with the changes in the country’s political and social environment, the younger generation is now more concerned with so-called “lifestyle politics,” which correspond to quality of life issues.

“Young people took to the streets against the resumption of U.S. beef imports last year not because of some political ideology such as ‘anti-Americanism,’ but because they are sensitive to quality of life issues and feared eating beef, which they assumed was harmful to their health,” Kang said.

Still, it is difficult to make generalizations about the generation as a whole because there are large economic and cultural gaps within the group, economist Woo Seok-hun says. “From an economic perspective, there are diverse groups within the ‘younger generation’ category, from rich to poor. Their cultural tastes also vary, and they don’t have a preference for Korean or foreign products. For instance, they prefer the iPod not because it is foreign made, but because of its quality,” Woo said.

The younger generation’s indifference to political ideology was obvious in the 2007 presidential election, when young voters paid more attention to the candidates’ values than the parties to which they belonged.

“The economy, a key issue in the election, was in some ways the most appealing issue for young voters,” said Song Ho-geun, a sociology professor at Seoul National University. 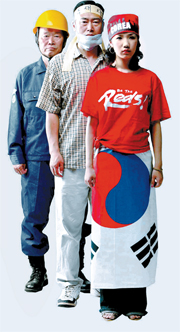 Kim Deegie, a 28-year-old rapper, became the talk of the town when he ran in the 18th general election last year, earning most of his support from young voters. He wrote a rap song that he performed as part of his campaign speech and it seemed to express the values held by a majority of the younger generation: “We don’t care whether you’re a conservative or a liberal, that’s not our priority when it’s so hard to make ends meet.”

People in their 20s in Korea are currently facing high unemployment rates unseen by the older generation. These days even if young people find employment, one third of the jobs are non-regular or temporary positions, according to recent statistics.

According to Statistics Korea, the number of jobless young people age 15 to 29 was estimated to be around 352,000 as of August this year, which translates to an unemployment rate of 8.2 percent, more than double the nation’s average jobless rate of 3.7 percent. However, the figure jumps to 20 percent when the economically inactive portion of this group, a total of 1.05 million people, is taken into account. People in the “economically inactive” category want to work but cannot find a job, whether due to lack of opportunity or enrollment in college or job preparation courses.

The harsh situation the younger generation is facing is perhaps best represented by the phrase “880,000 won-generation,” which originated with the title of a book written by the economist Woo. The figure, about $750, is the estimated monthly income of a non-regular worker in their 20s.

Meanwhile, Korea is facing another looming problem that is soon likely to become a burden for the younger generation: the combination of the country’s record low birthrate and its rapidly aging population.

To maintain Korea’s current population, the country’s birthrate, or the number of children a woman between the age 15 and 49 gives birth to during her lifetime, should be 2.1. However, the figure stood at 1.19 last year and is expected to fall further to 1.1 this year.

If the issue is not addressed, the country could be facing bigger problems down the line, including a decline in support for the elderly and the closure of schools in rural areas.

In addition, as the average life expectancy of Korean people increases amid the falling birthrate, Korea is fast becoming an aged society, experts say. The country officially became an aging society in 2000, when senior citizens (people over 65) made up more than 7 percent of the population. The percentage rose to 10.7 percent as of July this year and is expected to reach 14 percent in 2018. The year 2020 is likely to be a watershed year for Korea when the country’s baby-boomer generation, counted as people born between 1955 (following the Korean War) and 1963 (the year when government policies to control the birthrate were initiated), will join the “senior citizen” club.

As a result, 6.8 people between the ages of 15 and 64 currently support one person over the age of 65, but that figure is estimated to decline to 4.6 in 2020, which will place a bigger burden on the younger generation in Korea.

An aging society with a low birthrate can also intensify the conflicts between the younger and older generations. Japan, for one, is already engaged in a generational war. As Japanese young people have become more concerned with the aging population, they have also become more politically active, and it was their actions that served as the impetus for a change of government in the general election there in August. 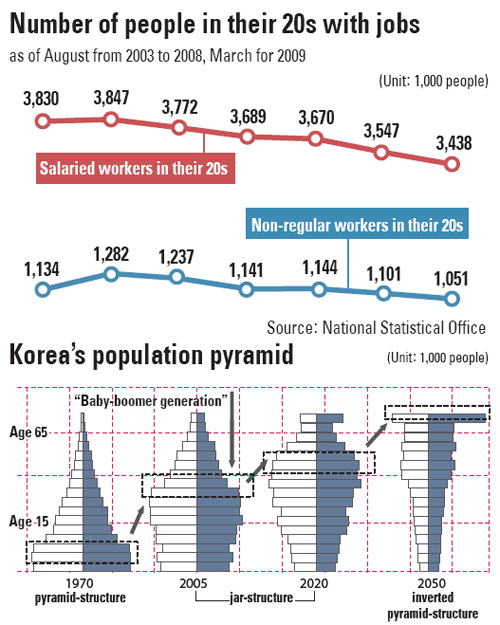 In order to prevent a generational conflict in Korea, the government should focus on creating jobs for the younger generation, Woo noted.

Kang, meanwhile, urged the president to take an active interest in the issue.

“The president’s attention matters very much in a country with an imperial presidency, and his attention can affect the priority given to political and social issues,” Kang said. “The president has so far been negligent in listening to the voices of the younger generation, but he needs to be more open-minded toward them and give them public encouragement.”

Last year, during the candlelight vigils against the resumption of U.S. beef imports, the barricades put up by police at what is now Gwanghwamun Plaza in central Seoul symbolized the lack of understanding between the older and younger generations, Kang noted.

“North of the barricades were the Blue House and the Central Government Complex, which represented government power and the older generation, while to the south was Seoul Plaza, where civic groups led by the younger generation assembled. The two groups were in a visual confrontation there,” he said.

What is also needed, experts say, is a “national vision” that the older and younger generations can share - a social consensus across generations on the values the nation should aim for in the long run so that Korea can achieve the kind of sustainable development that carried it through its industrialization and democratization periods.