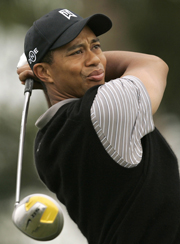 MIAMI - Police in Florida plan to interview Tiger Woods on Saturday about the events surrounding a car accident outside the golf champion’s house.

Woods, the world’s top golfer and a major sports marketing star, hit a fire hydrant and tree early Friday as he pulled his Cadillac Escalade out of the driveway of his house in Windermere, Florida, near Orlando, the Florida Highway Patrol said. He was treated at a nearby hospital with what police described as “serious injuries,” but the golfer’s office said the accident was minor and that Woods had been released from the hospital in good condition after being treated.

Investigators planned to question Woods, 33, who made a triumphant return to professional golf this year after missing much of last season following reconstructive knee surgery.

“We are investigating this as a traffic crash .?.?. our officers will be interviewing him [Tiger] this afternoon, but we won’t be releasing any information,” said Kim Montes, a sergeant with the Florida Highway Patrol’s Orlando division on Saturday.

When police arrived at Woods’ home shortly after the accident, the golfer was bleeding from the mouth and was “in and out of it for several minutes,” Windermere Police Chief Daniel Saylor told CNN on Friday.

He “was on the ground, semi-unconscious and had lacerations to the upper and lower lips,” Saylor said, adding that Woods’ wife, Elin Nordegren, used a golf club to smash a window of his SUV to get him out.

Nordegren “explained to my officers that the doors were locked and she could not gain entry” into the crashed vehicle, so she “used a golf club” to smash a window, he said. Woods was the only passenger in the vehicle, Saylor said.

The accident was not alcohol-related, the FHP said. “The crash remains under investigation and charges are pending,” it said.

Woods’ office, in a statement published on his Web site, said: “He was admitted, treated and released today in good condition. We appreciate very much everyone’s thoughts and well wishes.”

Woods is perhaps the world’s richest athlete and the biggest draw on the PGA tour as he chases Jack Nicklaus’ record for victories in major tournaments and the unofficial title of best golfer ever. He has won 71 times on the PGA tour in a glittering career that includes 14 major wins. Reuters