A critical look at global warming

A critical look at global warming 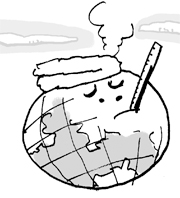 Europe in the summer of 2003 was hot like a frying pan. When the heat wave hit over 40 degrees Celsius (104 degrees Fahrenheit), nuclear power plants experienced difficulties in supplying cooling water. People suffered heat stroke and tens of thousands of deaths were reported.

If global warming continues, it is inevitable that heat waves like this one will become more frequent. However, some people retort that cold periods would also be reduced. Bjørn Lomborg, a Danish professor of statistics, claimed in his 2007 book “Cool It” that a merit of global warming is the reduction of cold weather related casualties.

However, Lomborg - who first questioned global warming in his 2001 book “The Skeptical Environmentalist” - changed his position a little thereafter. Although he denied the scientific grounds for global warming, he recognized global warming itself in 2007. But he argued that it would be more efficient to invest in fighting malaria and HIV/AIDS than pouring resources into cutting greenhouse gas emissions.

In the background of the change was the 4th assessment report presented by the Intergovernmental Panel on Climate Change in February 2007. Rounding up the opinion of 2,500 specialists and experts, IPCC declared that there was no room for the argument that human beings caused global warming. To this, skeptical environmentalists had no choice but to retract some of their previous statements.

Nowadays, the skeptics are raising their voices again. The average temperature of the earth has not gone up since it recorded 14.5 degrees Celsius in 1998.

Some time ago, about 4,000 e-mail messages and documents that well-known scholars in climatology exchanged were hacked and made public online. Among the e-mails exchanged were ones that raised suspicions that the scientists had been announcing research results that suited their own tastes and that only supported their theories on global warming.

Against it, climatology scholars argued that those who opposed cutting carbon emissions ahead of negotiations on greenhouse gas reductions at the United Nations climate change conference in Copenhagen on Dec. 7 hacked the documents to lead public opinion in their favor. They emphasize that global warming has progressed at a faster speed and in more serious ways than IPCC anticipated in 2007.

Under the circumstance where the basic trend has been set, and the greenhouse gas reduction targets of each country are presented, it is likely that the counterattacks of the skeptics will stop at being a tempest in a teacup.

If preventing global warming and cutting greenhouse gas emissions are vital problems that will decide the future of the human race, however, we must stop once in a while and check whether we are heading in the right direction.