The Knights’ curse returns for another year

The Knights’ curse returns for another year 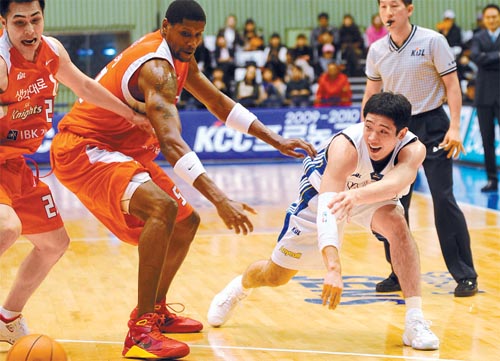 Joo Hee-jung, left, and Samaki Walker of the SK Knights attempt to defend against Lee Jung-suk of the Samsung Thunders on Nov. 27 in Jamsil, southern Seoul. [NEWSIS]

Baseball fans are well aware of the curse of the Bambino. The Boston Red Sox suffered an 86-year World Series drought after trading Babe Ruth to the New York Yankees.

Although not to the same extent, SK Knights fans are pointing to a similar curse these days. Since trading their star center Seo Jang-hoon in 2002, the Knights have not advanced to the postseason in seven years. Prior to trading Seo to Samsung Thunders, SK had won a title and placed runner-up twice in three seasons. While SK has failed to make the playoffs since Seo’s departure, Seo has continued to make the postseason without fail.

SK is off to another tough start this season. Prior to the start of the current season, SK was tabbed by many experts as one of the top clubs, but the team is currently struggling through a seven-game losing skid. Despite having acquired Joo Hee-jung and Samaki Walker in the off-season to bolster a lineup that featured Kim Min-soo and Bang Sung-yoon last season, the Knights are in seventh place in league standings with a record of seven wins and 12 losses. They did start the season on a positive note, winning four consecutive games. However, the team has struggled since due to three factors.

Bang returned to the lineup for the first time in eight games against KCC Egis on Sunday. He injured his ankle early in the season, and in an attempt to make an early return to the lineup, reinjured it. Bang chipped in with a 22-point effort on his first game back, but it wasn’t enough for the Knights to overcome their slump, and they lost their seventh consecutive game to KCC, 83-76. Bang is averaging 12.4 points but boasting an impressive 43.5 percent success ratio from beyond the arc.

“The team seems to rally around Bang on the offensive end of the game, and it resulted in a lack of fluidity on offense,” explained Kim Tae-hwan, an OBS basketball analyst.

“It looks like Joo is still adapting to the set offense and pattern offense of the Knights,” said Kim.

Joo is at his best when playing an up-tempo, fast-break based offense but has lacked the same explosiveness in set offense situations.

Walker, a former NBA player, has also failed to live up to expectations. That’s not to say Walker has been a bust. The veteran is averaging 15.7 points and has been unselfish on offense. He is also currently third in rebounds in the league with 9.4. However, he has lacked the same effectiveness on the defensive side of the ball and has no strong presence in the post.

And luck has not been on SK’s side this season either. Joo, Bang and Kim Min-soo all returned from East Asian and Asian tourneys during the summer with injuries, and it has hampered their play in league play. SK will play KT&G tonight in Jamsil, southern Seoul, tip-off time 7 p.m.