Left: The old Seoul Station building is undergoing a two-year renovation that began this summer. Officials hope to preserve the historic building by transforming it into a venue for cultural events. By Jeong Chi-ho
Right: The old Defense Security Command building is following suit with a renovation of its own. After the project is complete, the building will house a contemporary art museum. [JoongAng Ilbo]

Over time, buildings can become renowned attractions that serve as sources of national pride or major eyesores that rub people the wrong way.

Architecture in Korea from the early 20th century often falls into the latter category. Many buildings from this era that still dot the city have long been viewed as demons of a grim past, structures erected by foreign powers who more or less forcibly opened up the Asian kingdom to the world despite its desire to remain in a hermit-like state.

But Korea’s architecture from the past 100 years or so is enjoying a renaissance of sorts, with numerous projects under way or already completed to restore and preserve older buildings with cultural uses in mind. In June, Koreans witnessed the restoration of Myeongdong Theater in Myeongdong, Seoul, a landmark building constructed in 1936 during Japanese colonization (1910-1945). Three months later, a group of colonial structures built between the late-19th and mid-20th centuries around Incheon port on the east coast were reborn as an art complex called the Incheon Art Platform.

Now, the Ministry of Culture, Sports and Tourism is working on major preservation and renovation efforts tied to two highly important modern structures: The original Seoul Station and the old Defense Security Command building, which both served as a backdrop to many important events in the 20th century.

The government is requesting a total of 43 billion won ($37 million) for these projects in its budget proposal for next year, hoping to transform the building into the city’s newest cultural hot spots.

The buildings differ in their original purposes and history as well as the reasons they are being restored and the actual methods used to redevelop them.

But they also have a lot in common. Both lie right in the heart of downtown Seoul, only about a 15-minute drive apart. Each also went through dark periods and became detached from the general public over time. And in more recent times, they’ve both garnered a fair share of controversy as officials attempt to revive them and ensure they survive well into the future.

On an overcast afternoon last week, Lee Jong-june, an architect from Samoo Architects & Engineers, gave a passionate lecture to a small yet attentive group of locals in downtown Seoul. He spent time explaining how his firm is preserving and renovating the old Seoul Station building as part of a two-year reconstruction project that started in August.

“The ideas of preservation and renovation could easily clash. So a lot of our work on the design side involved finding the compromise between the two,” Lee said as he began the lecture, which was open to Seoul citizens.

Samoo also worked on the renovation of Myeongdong Theater as well as the Seoul Museum of Art in the Jeong-dong area, which initially served as the home of the Supreme Court when it opened in 1928.

The audience on hand - mostly middle-aged men and women - oohed and aahed as Lee showed old pictures of the train station and displayed a computer rendition of what it will look like once reconstruction is completed in 2010. Some in attendance asked questions, such as if the bullet marks from the 1950-53 Korean War on the concrete walls will be preserved (they won’t).

The old Seoul Station building, constructed in 1925, lost its function as a transportation hub in 2004 when Koreans welcomed a high-speed rail system and a newly built station to accommodate it. Since then, it’s been nothing more than an empty old shell, serving as a ghost from the past and a gathering point for homeless people.

But as the audience’s response to the old photos of the station indicates, the building was an integral part of the daily life of many Koreans for decades, particularly in the days when trains were the main form of transportation.

Hoping to give the old station a new “meaning of life,” the culture ministry held about 30 events there last year including a fashion show, exhibitions and performances. The ministry saw plenty of potential, as the events generated substantial interest from locals. 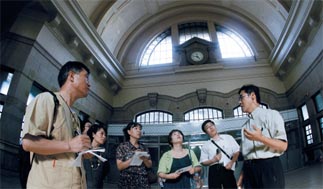 Ahead of the renovation, locals got a chance to tour the old Seoul Station building under the guidance of Ahn Chang-mo, the master planner of the reconstruction project. By Jeong Chi-ho

After the reconstruction, which primarily involves strengthening the concrete structure and various renovations, it will house a permanent performance hall and an exhibition hall, while the rest of the building will open up for cultural events on a case-by-case basis.

What about all the homeless people who currently gather there and the aversion many Koreans have to the area because of this?

Lee Yong-wook, of the culture ministry’s space design team for the project, is confident these problems will be resolved on their own.

“Since last year, when we began to hold events at the station, the number of homeless people there has conspicuously decreased,” Lee said. “The important thing is not to leave the station as an empty, abandoned house.”

Designated Historic Site No. 284 by the Korean government, the building is being cited by professionals in Korea’s architectural and historical circles as a prime example of how renovation and preservation can work together in harmony.

“The big question now is not how the building will be reconstructed but how it will fit in with its surroundings, which are changing,” said Ahn Chang-mo, an architecture professor at Kyonggi University and the master planner for the project. “How much synergy will the new building have with what’s around it?”

Much of that revolves around the massive subway area development project under way north of the station, which is slated for completion in 2014. The envisioned area will house high-rises for international businesses and other tenants, which will decide the general feel and atmosphere of the neighborhood.

“Next year, the subway line directly connecting Incheon International Airport with the Seoul train station will be completed,” Ahn said. “So this area will be the gateway to Korea for visitors. Creating a good first impression is important.”

Slightly north of the old train station lies the former Defense Security Command building, which is also generating buzz - both positive and negative.

The building, located just east of Gyeongbok Palace in the Gwanghwamun area, was built in 1928 as a hospital during Japanese colonization. Starting in the 1970s, it housed the Defense Security Command, which last year moved to Gwacheon, Gyeonggi. Now, it is listed as Korea’s Registered Cultural Property No. 375, a status given to modern structures that the government deems historically important. 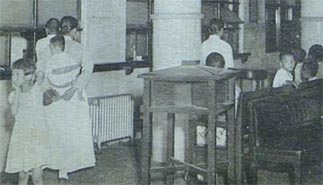 It also fulfills a public pledge President Lee Myung-bak made in the 1996 National Assembly elections, when he said he would help transform the building into an art museum. Last January, the government got the gears moving, officially announcing that the old Defense Security Command building would house the museum.

The building and its vicinity served as a key backdrop to both Korea’s ancient and modern history.

“During the Joseon Dynasty [1392-1910], the site housed jongchinbu, or the government organization that handled lineage books and portraits of the royal family as well as recruitment and management of palace officials,” Kim Jeong-dong, an architectural history professor at Mokwon University, said at a recent forum hosted by the Korean Institute of Architects.

The site was, in fact, a core part of the palace and therefore, Kim said, should be restored. But he argues that the building should be transformed into an archival museum for important historical documents rather than one focused on art.

Early in the 20th century, the main building was used as the hospital of Gyeongseong Medical College, the predecessor of Seoul National University’s medical school.

“During Japanese colonization, patients included independence fighters tortured by the Japanese. This led to a significant number of Korean students at the medical school who decided to take part in the independence movements,” said Kim Jong-hun, an architecture professor at Pai Chai University. Kim, who led the group of architects that the culture ministry brought on for research work related to the project, said the building embodies the early modernism style of architecture. He also noted that colonial hospital structures are rare in Korea, which highlights the building’s importance to the history of local medical practices.

Its use as the home of the Defense Security Command only adds to the building’s significance, as it was where Korea’s military government devised its policies - although they were not well received by the public.

Officials from the art museum originally wanted to construct an entirely new building, given the structure’s controversial past. But they have changed their position a bit and agreed to consider the “preservation plus renovation” idea.

Although the building was declared the new home for the art museum more than 10 months ago, the government only last week announced that it will be receiving design ideas - a testament to the complex history behind the building.

Yet more questions linger. Officials are still debating whether they should push for revisions to a cultural property law stipulating that only 25 percent of registered cultural heritage sites can be renovated. Also in question is whether the Armed Forces Capital Hospital will move out of the building’s left wing.

“I believe that because it will now house a contemporary art museum, we can revive the history of the building in a creative way” through this project, said Choi Hyo-joon, director at the National Museum of Art, Deoksugung, which is now a branch of Korea’s National Museum of Contemporary Art.

Choi, who’s leading the preparation committee, admits that he initially wasn’t sure if such a controversial building should remain in existence. “Perhaps through video art, or other pieces of art, we can honor the history that embraces all of its former uses,” Choi said.