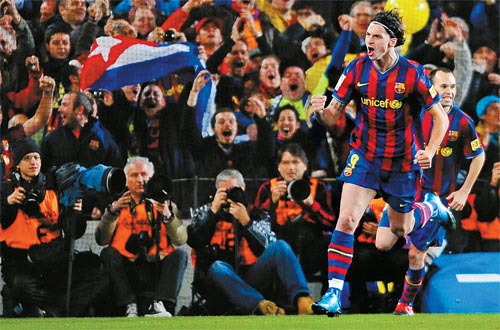 FC Barcelona’s Zlatan Ibrahimovic, of Sweden, reacts after scoring against Real Madrid during a Spanish La Liga soccer match at the Camp Nou stadium in Barcelona, Spain, on Nov. 29. [AP]

MADRID - Swedish star Zlatan Ibrahimovic was the hero as 10-man Barcelona defeated Real Madrid 1-0 in an enthralling El Clasico match at Camp Nou to move to the top of the table by two points on Sunday.

Cristiano Ronaldo and Lionel Messi, who was exceptional, both started. But it was Ibrahimovic, back from injury, who stole the limelight by volleying in a 56th-minute winner just five minutes after coming on.

“It is such a great feeling, especially after just coming back from injury,” beamed Ibrahimovic. “The cross from Dani [Alves] was brilliant and I just slotted it in.”

Barca were reduced to 10 men when Sergi Busquets handballed just after the hour mark.

It was a third successive Clasico win for Barca, who are still unbeaten this season and nudge Real off the summit, holding a two-point lead over their rivals.

Ronaldo started for the first time since the end of September with his ankle holding up. Karim Benzema dropped to the bench and was joined by captain Raul. Barcelona started with Messi, who shrugged off a thigh strain. But Ibrahimovic was on the bench with a thigh strain of his own, so Thierry Henry took his place.

It was touted as a Clasico between Real’s “Galacticos,” the most expensive team on the planet, and the homegrown talent of Barca’s “Cantera,” the world’s most successful team last season when they won a unique treble.

Real were second-best in terms of possession, and Messi looked up to the job as he thrust at the defense, twisting Pepe inside out. But Henry’s poor low shot ended the danger. Although Barca were passing well, Real initially looked like the more dangerous club.

At 19 minutes, Ronaldo should have scored after Kaka cut inside before sliding the ball across goal. But Ronaldo’s side-footed shot was saved brilliantly by Victor Valdes, who deflected the ball with his trailing foot.

It was then Puyol’s turn for a heroic block, in which he denied Marcelo at 29 minutes. Ibrahimovic came on for Henry minutes into the second half and had an immediate impact on his Clasico debut, scoring the opener five minutes after coming on.

Dani Alves curled a delightful ball across the face of goal and Ibrahimovic arrived on cue, guiding a left-footed volley past Casillas.

Barca looked in control, but Busquets was then sent off for a handball just after the hour mark, and manager Pep Guardiola was furious with his midfielder.

Real threw on Benzema but Barca should have made it 2-0, only Gerard Pique headed wide. Down to 10 men, Barca still attacked although Real had chances with Ronaldo heading over and Puyol producing another great block to thwart Benzema.

Real substitute Raul moved from right in front of goal, while Casillas pulled off a wonder save to deny Messi at the death.

Madrid’s Lass Diarra was sent off in the closing stages for hacking down Xavi after Barca pinged the ball about like they were in training.

Elsewhere, former Real Madrid striker Roberto Soldado scored his second hat-trick of the season as Getafe heaped more misery on Xerez with a 5-1 thrashing on Sunday. Xerez took the lead but Soldado equalized on 44 minutes and then netted his second 60 seconds later from the penalty spot.

To make matters worse, Xerez had David Prieto sent off for giving away the penalty. Getafe exploited the numerical advantage, scoring three times in as many minutes with Soldado wrapping up his hat-trick. It was a second treble for the striker following his hat-trick in a 4-1 win over Racing Santander.

In other matches, Deportivo La Coruna moved level on points with Valencia in fourth thanks to a 1-0 win at Racing Santander. Atletico Madrid are also in action later when they host Espanyol at the Vicente Calderon. AFP