A search for Korean identity in one artist’s broad strokes

A search for Korean identity in one artist’s broad strokes 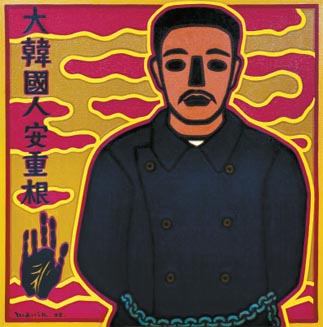 Dark bold outlines, simplified forms and earthy colors are part of the signature style that makes Lee Man-ik’s paintings instantly recognizable. The man himself, meanwhile, is very down-to-earth and genuine. Now 71, Lee says he wants his works to reflect humanism, which he believes is lacking in contemporary art.

“Contemporary art is not for humanity but is art for the sake of art,” Lee said. “I tried to put humanism-related themes into my paintings.”

Sixty paintings by Lee will be shown at Gallery Hyundai in southern Seoul beginning tomorrow in an exhibition titled “Worshiping Humanism.” These works include his most recent paintings, produced this year, as well as those created during the 1990s.

The artist said his style was formed in the late 1970s, after he returned from a trip to Paris that began in 1973. Lee says after his voyage to Europe he thought he ought to base his style on Korean emotions rather than simply following Western traditions.

“I painted and erased over and over,” Lee said. “Then, I came across the concept of ‘We Koreans.’ I wanted to include human relationships between me and my family, with family and neighbors, and with my country and its history. There, I wanted to find our identity.

“As I delved into Korean themes, my paintings became more two-dimensional and out of perspective.”

Lee’s paintings were so unique and powerful that some of his works were even used as posters for cultural events. His painting of Queen Myeongseong was used in 1995 as a poster for the local musical “The Last Empress,” which was based on the life story of the Joseon Dynasty (1392-1910) queen who was murdered by Japanese agents in 1895. Another piece was used for the 2007 musical “Dancing Shadow,” which was adapted from the novel “Forest Fire” by Cha Bum-suk about a remote village during the Korean War. These two pieces are also part of the exhibit.