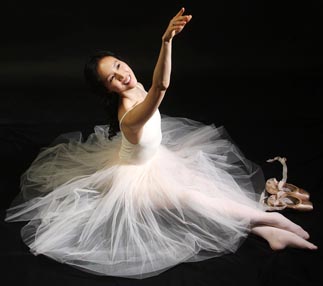 Korean ballerina Seo Hee returns to the local stage this month after her recent success in the United States. [JoongAng Ilbo]

Korean ballerina Seo Hee’s story is quite dramatic. She began dancing at the age of 12, which is quite late in the ballet world. At first, she struggled to learn the movement. Just six months later, however, she won a scholarship to an arts school in Seoul. A year after that, she moved to Washington, D.C., to train at the Universal Ballet Academy. Then came the magical moment in 2005 when she was invited to join the corps of the American Ballet Theatre, one of the top five ballet companies in the world.

Seo found herself on the fast track to stardom four years later when she won the leading role in “Romeo and Juliet,” which was presented in July at the Metropolitan Opera House in New York.

But not everyone was enthusiastic about Seo’s leading role. When Seo was cast, some doubted whether she was the right choice for such a big role. But Seo proved herself, and then some, going on to play the leading roles in ABT productions of “La Sylphide” and “On the Dnieper.”

Seo was also selected as the cover girl for the October edition of Pointe magazine, a U.S. ballet publication whose cover is generally reserved for world-famous ballet stars such as Julie Kent, Alessandra Ferri and Vladimir Malakhov.

In Korea, Seo is earning rave reviews from the local ballet community, which sees Seo as the next Kang Sue-jin. Kang is a principal dancer at the Stuttgart Ballet in Germany and is credited with taking Korean ballet to the next level.

Experts here say that much of Seo’s success can be attributed to her perfectly proportioned physique.

“She has the right size face, arms, legs and waist for a ballerina,” said Jang Sun-hee, a professor at Sejong University.

However, experts are also quick to point out that the way Seo expresses herself also makes her stand out.

Julia H. Moon, head of Seoul-based Universal Ballet, says that “ballerinas should have a third eye on their chests,” meaning that they need to use their upper bodies and arms as a conduit for their emotions, and that “Seo does an excellent job of using her upper body to express herself.”

Seo has also been praised for the range of characters she is able to portray. Not only has she portrayed the innocence of Giselle and Sleeping Beauty, she has been equally successful at revealing the complexity of characters like Carmen.

“Seo does have the perfect body for a ballerina, but her greatest asset is that she has the insight to interpret roles [in her own way],” said ABT Artistic Director Kevin McKenzie.

Local ballet fans will soon have a chance to see Seo here. She will play Clara in “The Nutcracker” with the Universal Ballet on Dec. 23, 25 and 27 at the Universal Arts Center. She will also pair up with Cuban dancer Jose Carreno in an excerpt of “Le Corsaire” for the Etoile Ballet Gala in January at the Seoul Arts Center.