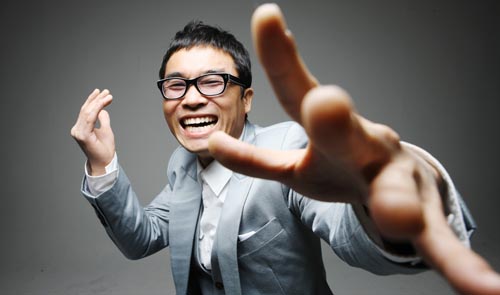 Kim Gun-mo, known as the Korean Stevie Wonder, returns to the stage once more with his Soul Groove tour, which will take place over the weekend at Olympic Hall in Olympic Park. See MUSIC, below. Provided by Media Line

The performance will feature a number of different styles of traditional Korean instrumental music, including gagok, which is a representative vocal genre appreciated by the scholars of the Joseon period (1392-1910). It uses sijo, or traditional Korean poetry with fixed forms, for its texts. Performed since around the 16th century, in the early Joseon period, gagok has been passed on to today, undergoing many changes and generating variations.

Gagok is always accompanied by a chamber ensemble comprised of wind and string instruments, and composed for both men and women.

A feature of gagok is that any sijo text, depending on its content and poetic rhythm, can be sung to any of the gagok melodies. During a performance, gagok pieces were traditionally sung by a man and woman alternating the lines, except for the last piece, “Taepyeongga,” which is performed by both singers together.

Friday: “Yozoh’s ‘It’s Love O’Clock’ Concert.” Known for her sweet upbeat vocals and her performances with the Sogyumo Acacia Band, Yozoh presents a winter concert for her fans.

Expect to hear songs such as “After Breakfast,” “Morning Star” and “Harmonica Sound” from her full-length solo album “Traveler,” which was released in 2008 on the indie label Pastel Music.

Since this Korean female singer debuted about 10 years ago, she has worked with big-name artists such as Eric from the group Shinhwa, Humming Urban Stereo, Lee Hyo-ri and Lee Min-woo. On top of that, her music has been featured on soundtracks for the hit dramas, “Coffee Prince” and “New Heart,” as well as commercials.

Saturday: “New York Harlem Singers of Christmas in Korea.” This ensemble of gospel singers will present a special Christmas-themed concert at the Seoul Arts Center.

For this December’s concert in Seoul, the ensemble has prepared a wide selection of songs ranging from classic jazz numbers by Duke Ellington to modern ballads like “My Heart Will Go On” by Celine Dion. As a special tribute to the King of Pop, the program will also include some famous titles from the late Michael Jackson. The group will also sing a variety of Christmas carols.

The ensemble, comprised of seven vocalists and two instrumentalists, is led by one of the most influential musicians in the African-American music community, Linda Twine. Twine is known for her role as the artistic director of several Broadway musicals, including Oprah Winfrey’s production of “The Color Purple.”

Cho is widely recognized as one of the greatest singers in the history of modern Korean music. He has spent much of his recent career focusing solely on live performances, rather than on television appearances. On average, Cho gives about 30 concerts a year.

Cho has always had diverse musical tastes. He jump-started his musical career by forming a band called Atkins, which was a country and western group that played for the U.S. Army. He later founded the rock group Kim Trio. His debut single, “Come Back to Busan Port,” which was released in 1975, became a hit song in Korea and then later in Japan.

Cho’s annual Year’s End concert has been promoted as one of the biggest must-see performances of the year. He will be performing a selection of songs from his repertoire of endless hits from his extraordinary 30-year career.

Saturday and Sunday: “Kim Gun-mo - Soul Groove.” Kim Gun-mo, who is also known as the Stevie Wonder of Korea, will give an encore performance following his successful tour in April.

Kim is known for possessing a musical versatility that covers a vast range of genres, including pop, soul, reggae, house, blues, ballad, electronica and slow jam. He has managed to awe his listeners with memorable hits and his ability to balance mainstream trends with his signature voice.

The 41-year-old veteran holds the record for the biggest selling album in Korea with his third studio album, which sold over 2.8 million copies. Some of his hit singles include “Excuse,” “Wrongful Meeting” and “Jjangga.”

Sunday: “Bambini di Praga.” The Bambini di Praga is a talented Czech children’s choir, better known as “The Sparkling Jewel of Europe.” They are making the long journey to Korea for this special Christmas concert to help get everyone into the spirit of the holidays.

The choir is composed of mostly 12- to 20-year-old girls, and they have performed at many venues in Europe, North America, Africa and Asia and elsewhere around the world.

One of the highlights of the choir’s performances is the diversity of styles in the music they present - including pop, jazz, 19th-century choral works, folk songs and Christmas carols.

Since 1985, Bambini di Praga has released more than 30 recordings, and their Czech and Moravian Christmas recordings have been especially admired around the world.

During the Bambini di Praga’s performance in Seoul, the choir will include in their repertoire Christmas carols from the Czech Republic, Austria, Germany, Poland, the Ukraine, Spain, the U.S., England and Korea.

The performance will take place at 2:30 p.m.

Through Jan. 31: “Equus.” Renowned theater company Yeongeukyeoljeon will perform Peter Shaffer’s critically acclaimed play, “Equus,” which is about a psychiatrist who attempts to treat a young man who has a pathological religious and sexual fascination with horses.

Yeongeukyeoljeon went through an extensive pre-production process, with over 2,200 actors auditioning for parts. In the end, only a total of 12 talented actors and actresses were cast in the play.

While the production faithfully follows the characters and the story line of the original, director Jo Jae-hyeon also incorporates his own artistic vision.

This production will give those who have seen the original Equus a different look at Shaffer’s masterpiece, while first-time viewers will be able to appreciate the high production value and strong performances of the actors.

The performance starts at 8 p.m. on Tuesdays through Fridays and at 3 and 7 p.m. on weekends.

Saturday and Sunday: “An Overnight Gugak Performance with Dokkaebies.” Stay up all night for a special gugak (traditional Korean music) marathon with the folks from the TV show, “2 Days and 1 Night.”

Keeping with the Korean tradition of getting rid of the bad luck accumulated during the year and greeting the new year with a sense of renewed hope, the show will introduce the myths of the Korean ghosts called dokkaebi.

Throughout the marathon performance a variety of traditional Korean performing arts will be showcased, including salpuri dance, pansori singing and samulnori performance.

The audience will get a chance to participate in the events and win special prizes.

Sunday to Jan. 2: “Quiz Show.” The Seensee Company raises the curtains for their ambitious new musical, “Quiz Show” on Sunday.

The musical pinpoints the emotional conflicts, social discrimination and hardships that the younger generation goes through when searching for a job. The musical’s protagonist is Min-soo, who works part-time at a convenience store and has to deal with irritating customers. After Min-soo’s grandmother passes away, he becomes a professional quiz show player in an effort to repay the debts that were passed onto him.

Quiz Show features powerful choreography and hypnotic music and lyrics that draw on the lives of the story’s characters, and presents its story in a way that viewers young and old from all over the world can relate to.

The musical started in 2007 after Seensee Company purchased the rights from the author of the novel on which the musical is based, Korean writer Kim Young-ha.

The performance starts at 8 p.m. on Tuesdays through Fridays, and 3 and 7:30 p.m. on weekends.

Through Dec. 24: This festival at the Korea Foundation Cultural Center celebrates the universal art of illustrated books through an exhibition and animated film screenings. Over 100 picture books from all over the world will be featured. Admission is free.

Dec. 10 to Dec. 19: Now in its 35th year, the Seoul Independent Film Festival offers moviegoers a chance to delve into Korea’s indie culture. Festival organizers hope to encourage Koreans to look beyond conventional cinema and to inspire and stimulate the domestic market. A total of 34 shorts and 11 feature films were chosen to compete in the festival, out of a record 722 films submitted. In addition to Korean films, the festival will feature the work of Filipino filmmakers.