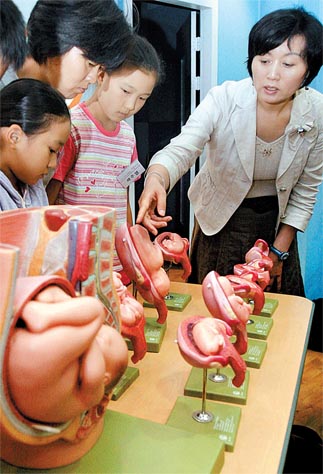 Most of the nation’s practical sex education programs are only available outside the classroom. Above, a group of elementary school students and their parents learn how fetuses grow at the Songpa Sexuality Center, located in Songpa District, eastern Seoul. Provided by Changdong Youth Center.[NEWSIS]

What would you say if you were told that something as simple as sex education could help Korea stem its rising abortion rate and prevent child sex crimes?

Many people would likely be all for it, as long as it actually worked.

Some experts, convinced that sex education is indeed the key to both of these issues, are now aggressively promoting the benefits of teaching children about the birds and the bees at an early age. Supporters see it as a valid alternative to a government crackdown on illegal abortions and a stronger deterrent than the threat of tracking those convicted of molestation with electronic monitoring devices.

The challenge, however, is convincing parents and teachers that sex education in the classroom - long a taboo subject in Korea - can help address several major societal problems.

Lee Hyun-hye, a professor at the Korean Institute for Gender Equality Promotion and Education, said that learning sex education at a young age could have helped people like Cho Du-sun, a 57-year-old man who brutally raped an 8-year-old girl. The victim lost 80 percent of her colon and genital organs as a result.

“If Cho grew up with good sex education,” Lee said, “he wouldn’t have raped the little girl in that cruel way.”

It’s a bold assertion that certainly invites some skepticism.

But there are plenty of supporters of the benefits of sex ed as well.

“As a way to curb increasing teen crimes, we give lectures at schools on sexual violence, because we believe it is helpful for teens in some way,” said Lee Ju-hwan, a captain with the National Police Agency.

At the very least, it’s clear that there is a severe lack of sex education in the educational system across Korea. In fact, sex education here more or less remains stuck in the 1980s, as students often receive just an overview of the subject through simple cartoons that rely heavily on metaphors.

“All I remember about sex education is a videotape that showed a swarm of bees carrying pollen. That’s the only sex education I got from school,” recalled 35-year-old Choi Yu-jeong, a graphic designer living in northern Seoul, who attended middle school here in the late 1980s.

Fast forward to 2009, and things aren’t much different despite rapid changes in almost every other aspect of society.

Videos that teach through metaphors are still used by health teachers, and many students find them boring and useless. According to a survey conducted by the Aha Sexuality Education and Counseling Center for Youth in 2007, 43.8 percent of teenagers said the sex education they received from schools was neither helpful nor practical.

At the same time, the country is grappling with a high level of abortions and an increase in sexual crimes against and among youth.

The number of abortions totaled 350,000 in 2005, according to the latest government figures, which is much higher than many other countries, experts say. Additionally, the National Police Agency said in July that sexual violence committed by teenagers jumped from 1,165 incidents in 2003 to a whopping 2,717 in 2008.

“Teenagers are easily exposed to a huge amount of sexual information through the Internet, but most of it is pornography that deals with one aspect of sex and does not include life, love and respect,” said Kim Ae-sook, director of Pureunausung, which offers sex education classes.

“It gives teens a distorted view of sex. Once teenagers get access to such content, they become addicted and they want to imitate what they’ve seen. What the teenagers need is someone who can correct this view and give them guidance on sex.”

There are numerous barriers in the way, however.

The nation, for instance, has no unified policy on this end. The government has taken a limited role when it comes to sex education, saying it’s up to individual schools. 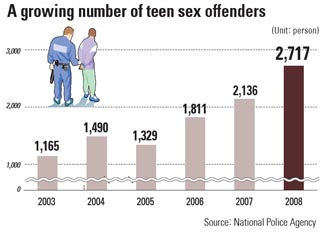 “It’s the schools’ role to allocate their budgets and decide whether they will have sex education programs,” said Cho Myeong-yeon, an official with the student health team of the Ministry of Education, Science and Technology.

Earlier this year, the ministry issued new guidelines that suggest schools nationwide provide at least 17 hours of health classes each year. The courses, it says, should deal with seven different subjects including diseases, personal hygiene and sex education.

Some observers applaud the move, but they say it’s simply a start - not a solution.

“It’s a great achievement, primarily because we had no guidelines in the past,” said Kim Hye-sun, a chairperson at the Seoul Health Teachers Association and a health teacher at Samjeong Elementary School in Banghwa-dong, Gangseo District, western Seoul. “But we have to teach seven different subjects within 17 hours, and that isn’t enough to continuously educate children on diverse aspects of sex in organized ways.”

There’s also a lack of manpower. 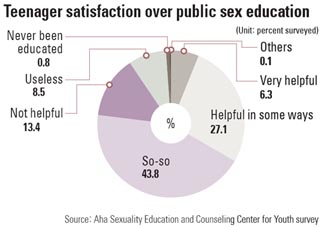 Take Ewha Girls’ High School, where there are 14 English teachers yet just one health teacher for the entire student body, making it difficult to offer in-depth and continuous sex education. Nationwide, each public school has one health teacher, but some private institutions don’t have any, citing budget issues.

Another challenge revolves around cultural norms and taboos.

“In the Confucian-inspired culture, people do not open up about sex, and no one was really educated about it in the first place,” said Lee Hyun-hye, a professor at the Korean Institute for Gender Equality Promotion and Education. “That’s why parents do not know how to educate their children.”

Since schools don’t provide that education either, children must get it elsewhere.

“Many school principals do not like the idea of providing sex education,” said Kim Yoon-ju, head of the education team at the Aha Sexuality Education and Counseling Center for Youth, located in Yeongdeungpo, southwestern Seoul. “They think it will open a Pandora’s box.”

And even at outside institutions that attempt to provide sex education, there often are strings attached.

Many teachers, for instance, want a say in what type of information their students are getting.

“Before I give a lecture to students, teachers often come and tell me not to mention a few things such as sexual intercourse because they don’t want their students to be sexually stimulated,” said Kim Min-a, an instructor at Changdong Youth Center, located in Dobong District, northern Seoul.

“But I think we have to provide teenagers with what they want to know in direct and straightforward ways. Otherwise, they will browse the Internet and get wrong information about sex.”

Some progressive teachers want to change sex education, but their efforts often fail. Yu Kyeong-ja, a health teacher working at Boin High School located in Ogeum-dong, Songpa District, eastern Seoul, said a colleague once received a barrage of complaints from parents after the teacher demonstrated how to use a condom.

“Parents were mad because they thought the teacher was encouraging students to have sexual relationships by teaching them how to use contraception,” Yu said. “For this reason, I can’t go deep into sex education but have to play the videotapes instead.”

Fortunately, private counseling agencies are endeavoring to help teenagers outside the classroom, providing a new method for disbursing sexual information to youth.

Free counseling through Web sites and phones is available, even for those who live outside of Seoul. The Naeil Women’s Center for Youth and the Aha center have experience zones where students can learn about contraceptives, including condoms and birth control pills.

The Changdong Youth Center is one of them. On a recent Saturday, the center was packed with a group of elementary school students.

Kim, of the youth center, told the children that sex is not ugly or perverted, but rather something that is extremely precious.

“School teachers want us to touch upon sexual violence and sex trafficking, which are the negative sides of sex, but we’re trying to let them know sex is something we have to know well because it is a way to understand men and women,” Kim said.

Among students who attended the Saturday class, several third graders said that it was the first time they had received sex education.

“It was fun watching an animated film about sperm and eggs. I didn’t know that sperm compete with one another like that,” said third-grader Lee Seung-un, who attended the class.

Another sex education class - held earlier this week at Yongmoon High School, located in Anam-dong, Seongbuk District - shows positive changes are under way when it comes to sex education.

Here, 500 or so high school graduates recently sat for a sex education course presided over by Lee Kyung-hee, an instructor at Pureunausung. Lee talked about diverse issues ranging from date rape to pornography.

Instead of preaching, Lee gave students detailed information about various aspects of sex - such as how to communicate with your partner when you’re dating and the difference between men and women - and touched on venereal diseases and other health threats.

“What sex education instructors do is help teens make wise decisions by teaching them about the true meaning of sex,” Lee said.

At the end of the class, Lee received applause from the students.

The sex education class was organized by Choi Nak-won, who teaches Chinese characters.

“After I heard about the Cho Du-sun case, I realized many guys desperately need guidance on sex,” Choi said. “Cho Du-sun had very distorted ideas about sex, and I think many men do as well. A one-hour class is not enough, but I hope it will help them when these kids grow up and go out into society, as it is one of the major life skills that we all have to learn.”

Advocates, however, admit that sex ed is only one part of a multipronged approach.

“Sex education is one way that we can counter the soaring rate of sex crimes, but we need a broader approach,” said Lee Myung-hwa, head of the Aha youth center, who has been in the sex education field over the past 19 years.