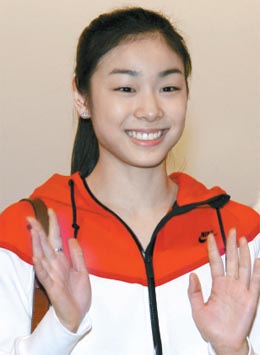 TOKYO - Kim Yu-na is set to embark on her final challenge before the 2010 Winter Olympics in Vancouver take place from Feb. 12 to 28. The International Skating Union Grand Prix Final in Tokyo, Japan, is set to kick off tomorrow night. It will serve as Kim’s final rehearsal prior to the Winter Games, and Kim will also take it as an opportunity to make last minute adjustments to her routine.

Since making her senior tour debut at the 2006 Skate Canada event, Kim has experienced both highs and lows at the ISU Grand Prix Final. Kim won back-to-back Grand Prix Final events in 2006 and 2007. When the event was held in Goyang, Gyeonggi, in 2008, many hoped she would deliver a three-peat but Kim failed to live up to the expectations. Due to her poor conditioning at the time, Kim gave a lackluster performance and Mao Asada of Japan ended up winning the gold. Asada has failed to qualify for the Grand Prix Final this season, placing ninth overall. Kim, meanwhile, is determined to finish her world record-setting ISU season with a gold here in Tokyo.

Kim’s loss at the 2008 Grand Prix Final in Goyang has turned out to be a positive experience for her, as it has motivated her to work harder. Kim immersed herself in a tough new training regimen and went on to set new records in four consecutive competitions. Kim’s first new world record was set at the 2009 Four Continents Figure Skating Championships in Vancouver, Canada, with a score of 72.24 in the short program. She would go on to improve on her world record with a score of 76.12 in the short program and a combined score of 207.71 in the short and long programs at the 2009 World Figure Skating Championships in Los Angeles.

Kim has since overhauled her program but has continued to set records this season. She topped her own record in the short program yet again at the season-opening Trophee Eric Bompard in Paris, where she earned a score of 76.08 in the short and a combined score of 210.03. In her next competition at Skate America, she dominated the short program with a score of 76.28. And although she placed second in the free skate, Kim still went on to win the competition with a combined score of 187.98.

Kim is clear of injuries and is now in top condition. She will start practice sessions here in Tokyo today.