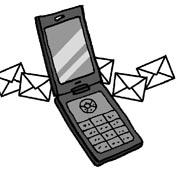 If they were born in the present day, Romeo and Juliet might have been united and grown old together. They met tragic ends because Romeo failed to receive Juliet’s letter on time, which was to inform him that she took phony poison to avoid being married to another man. If happened nowadays, sending a text message would have sorted out the problem: “Darling, I am not dead actually^^don’t worry, wait ???”

The clearest side effect is the breaking down of orthographic norms. In China, people who try to avoid hitting the keypad many times prefer to use Arabic figures that make similar sounds with the word. I love you in Chinese, wur-ei-ni, is typed as 520 (wu-eol-ling). A bit of foul language, chi-sseu-fa, or “Go chase yourself!” is replaced by 748 (chi-sseu-fa).

In English-speaking countries, numerous abbreviations have crept into usage. “U” stands for you; “lol” for laughing out loud; and “brb” means be right back. Since people have begun to use such abbreviations without hesitation, not only in daily conversations, but also on official papers such as reports and curriculum vitae, cries of worry have grown louder.

Exchanging text messages in excess can also be bad for your health. Texters not only use muscles in their thumb and neck to excess, but also suffer from such problems as want of sleep and lack of concentration. The dangerous practice of exchanging text messages while driving, which can destroy the lives of other people, has emerged as a hot issue. Even the New Oxford American Dictionary listed “intexticated,” coined after intoxicated, as one of the finalists for its “Word of the Year.”

According to a survey based on truck driving statistics carried out by Virginia Tech, the danger of being involved in a traffic accident is 23 times higher than usual if the driver is exchanging text messages while driving. That’s a much higher rate than talking on a cell phone while driving. As the number of accidents related to text messages has continued to increase, it has been suggested in the United States to introduce a system that would prevent drivers from texting or making phone calls by using GPS sensor technology, or providing the service of conveying text messages with spoken words.