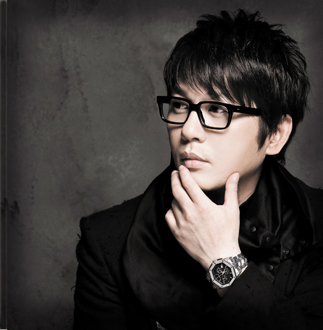 When he’s working on a new album, Shin says he barely leaves his house and stays in “songwriting mode,” which for him means that he scarcely pays attention to what he wears or what he looks like. Once an album is released, however, Shin says he goes back into “celebrity mode,” in which he takes greater care of his appearance. Provided by Dorothy Music

If you love Korean movies or TV dramas and listen to Korean music, you are sure to recognize the name Shin Seung-hun, the man behind hits such as “I Believe,” which was the theme song for the 2001 romantic comedy “My Sassy Girl.” Shin also sings “Love of Iris” off the soundtrack of the blockbuster Korean TV drama “Iris,” which has recently been renewed for a second season next year.

A heavyweight in the Korean pop music scene, Shin’s singing career spans nearly two decades and his albums have sold over 15 million copies to date. Yet despite his measurable success, the 41-year-old musician still seems to be experimenting with his musical style, and his efforts to stretch himself as an artist are apparent on his latest album “Love O’Clock.”

On the new release, which is the second in a planned three-album series he is calling “Three Waves of Unexpected Twists,” Shin offers songs with a distinctively R&B feel. The title track, “Fool for Love” is a departure from the teary ballads that have become part of his signature style, but that didn’t seem to bother his fans.

On Nov. 12, the day “Love O’Clock” was released, about 1,000 fans lined up to buy the new album at the record shop inside of Kyobo Bookstore in Gwanghwamun. The first edition of the album sold 20,000 copies immediately after its release.

Shin said in a recent interview that he is pleased with the immediate and positive response to his new sound, adding that the more he learns about music, the more he feels he needs to learn.

Q. Your fans have lined up to buy your album. Did that surprise you?

A. I think that as my longtime fans continue to grow with me, they prefer to stick to the old school ways. I think they felt bad about downloading my music off of the Internet and took the trouble to go out and buy it. I’m not as popular on the Internet as I am offline (laughs) and I did not expect that this album would be such a commercial success.


What do you mean?

When I came up with the idea for the three-album series, I didn’t want it to be commercial, and I wanted to focus on making the music I like, no matter what that may be. Releasing my 10th album three years ago got me thinking about a lot of things. When I create ballads, people say that the music sounds the same and that there’s no variety, but when I try to be more experimental, people start getting suspicious and wonder what I’m really up to. (Laughs.)

I felt like I should study more before coming out with my next regular album [his 11th].


It sounds like you really pay attention to what people say about you and your music.

Well, I just wish people would accept my style of music. When people look at a van Gogh painting, they don’t usually say, “Isn’t this painting too van Gogh-esque?” or “Abstractionism is the latest trend in the art world, so he should have tried to draw in that style.” (Laughs.) I’m not saying that I am a man of genius like van Gogh, but I just hope people can appreciate each artists’ own style.

How would you define your musical style?

I don’t think my music belongs to a specific genre... I just try to convey this feeling of sorrow without making it too obvious. Kim So-wol’s poetry, which deals with love, has moved me since I was young. I think that influences a lot of my songs now.


This album also has five songs based around the theme of love.

For me, making an album is similar to making a film. Films usually reveal a spectrum of human emotions from the opening to the climax. The same elements should come into play for an album. That is, the whole story and the flow of human emotions should be part of any album.

However, with everything going digital nowadays, musicians seem to be less creative. When asked what they are trying to say through their songs, some of them can’t really give a definite answer, saying things like, “Well... it’s something about sadness.” The quality of music is destined to decline if artists don’t think more deeply about their songs.


You didn’t write your own lyrics this time. Why not?

I didn’t have to be imaginative in order to write music in the past. The lyrics that I wrote were spontaneous, even if sometimes they were illogical or not well organized. Now that I have more experience, I know what people want to hear, but if I write that way, it won’t be coming from me anymore.


I’ve heard you haven’t dated anyone in a while. Could that be the reason you’re having trouble writing?

I agree that being in a relationship and going through the process of falling in love, breaking up and feeling sad about it certainly helps you to write music about love, but that’s not something you can plan. (Laughs.)


Next year marks the 20th anniversary since your musical debut. How do you feel about that?

Every time I release an album, I always think about what I want and I realize that I just want to give the best concert every time as well as make songs that are worthy of that title. I’m planning a solo concert this month and more concerts and events will come along in Japan and Korea next year to celebrate my 20th anniversary. I entered the music world because I liked the great artists of our time such as Yoo Jae-ha and Kim Hyun-sik, and I still believe that music has the power to change people’s lives. Twenty years later, I feel a sense of responsibility that I should become an artist who can be an inspiration to younger musicians.