Confident Park Ji-sung back in action

Confident Park Ji-sung back in action 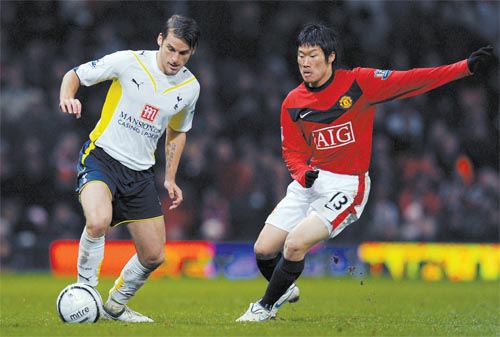 The 28-year-old Korean looked happy during an interview with the JoongAng Ilbo after the match.

Park had not appeared in a full match for Manchester United since playing the Aug. 19 game against Burnley FC in Burnley, England. He was hampered by a knee injury but was also scratched from games in favor of some of the other talented players on the team.

Although Park played in the UEFA Champions League Group B match against the Besiktas of Turkey, he was in the game for just 69 minutes. Manchester manager Sir Alex Ferguson began to use Park in the center midfield and left wing positions midway through the second half in an effort to mix it up a bit.

Park said he has fully recovered from his injury and has improved his conditioning to the point where he can play the entire 90 minutes. Ferguson decided to start reserve players for the game, and Park took the field with some of his younger teammates such as Danny Welbeck, Gabriel Obertan and Darron Gibson. Answering each question with a smile, Park spoke confidently about regaining his starting spot in the lineup.


Q. You played in your first full match since returning from your injury. How did you feel?

A. I was able to play the entire game because my conditioning was up to par. I did not have any physical problems despite playing the entire 90 minutes.


Did the rest after playing in international friendlies against European teams help you in the game today?

Since getting injured, I figured out what the problem was, and the team and I found a program suitable for the problem. I was satisfied with the match and I will continue to show good results.


In the 33rd minute of the match, you had an opportunity to score but collided with Wellbeck and, in the process, could not get off a shot.

I should have scored on the opportunity. Failure to do so is my fault. I think it was a good opportunity.


You were communicating with defender Ritchie De Laet on many occasions.

We spoke about the opposing team’s overlapping plays and positional changes and how we can defend well against such changes.


Ferguson stated that the young players who played in the match against Tottenham are the future of Manchester United. What’s your take?

They are talented players and, with experience, they will develop into fine players for the Reds.


You played several positions today after having done the same for the national team of late. Did that experience help you today?

I don’t think there was a time when I did not change positions during a national team match. Adjusting to such changes during a match is not a big problem for me.

There are many matches remaining in the season. Do you think you can gain a foothold in Ferguson’s starting rotation?

If I wasn’t confident, it would be time for me to leave Manchester United. All players on this roster are confident about their chances, and that is why they remain with the team and compete for a starting job.

I know I have something to offer to the team and with that in mind, I will work that much harder in the remainder of the season. I have yet to play in a match without feeling confident about my abilities.