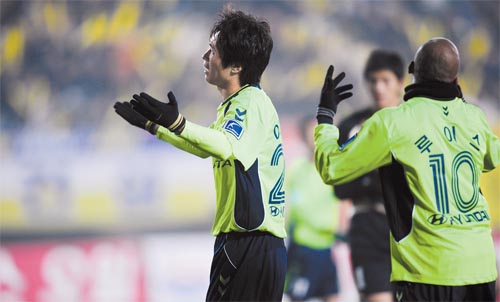 Jeonbuk Motors players Lee Dong-gook and Luiz Henrique react to a goal disallowed on a handball call on Luiz in the 43rd minute of Wednesday night’s K-League final at the Seongnam Sports Complex in Gyeonggi. [NEWSIS]

The 2009 K-League season and the fate of two clubs now come down to 90 minutes to be played at the Jeonju World Cup Stadium in North Jeolla on Sunday afternoon.

Jeonbuk Motors and Seongnam Ilhwa Chunma played to a scoreless draw Wednesday night at the Seongnam Sports Complex in Gyeonggi.

Most teams that win the first leg of the finals go on to win the league title - 89 percent to be exact. But with such a statistic rendered pointless, the finals are once again up in the air with Jeonbuk vying for their first league title in 15 years on a home field while Seongnam tries to continue its impressive run toward its eighth league title.

Jeonbuk, which finished the regular season with the best record in the K-League, played in its first game since the regular season finale against Gyeongnam FC on Nov. 1. With three players from the Seongnam midfield and defense missing from the lineup, Jeonbuk looked to take full advantage by using Lee Dong-gook, Brasilia and Choi Tae-uk up front and Luiz Henrique as the attacking midfielder.

Jeonbuk created several quality chances, but forward Lee Dong-gook failed to capitalize on them. Lee, the top goal scorer during the regular season at 20, drilled a shot past the Seongnam goalkeeper on a feed from Luiz In the 43rd minute of the match, but the goal was waived off by one of the extra linesman near the goal line. Luiz had trapped a pass near the goal area, and the linesman ruled the ball had touched the Brazilian midfielder’s left hand.

“As I have said in the past, the finals are different from other matches,” said Choi Kang-hee. “We were coming off a long layoff, plus the slippery field condition was not good.

“We played better in the second half and created several chances, but could not capitalize on them. But a scoreless draw is not a bad way to start the series.”

Seongnam had four players missing from the starting lineup: forward Dzenan Radoncic, midfielders Lee Ho and Kim Jung-woo and defender Jang Hak-young. Radoncic and Lee will return to the lineup after missing leg one due to accumulated yellows, while Jang is done for the season after being red carded in the semifinals against Pohang. Kim Jung-woo left for basic training to start his mandatory military service after the semifinals against Pohang. Still, with key members Randocic and Lee returning for the second leg, many figure it will muster a stronger showing on Sunday.

“I told them to relax and approach the game as if they were playing a friendly match against a university team. A tie is not a bad result,” said head coach Shin Tae-young. “We will have two players return on Sunday. If Jeonbuk attacks early, we will respond with an attack-minded game of our own.”