Soaking up the holiday spirit in Seoul

Soaking up the holiday spirit in Seoul 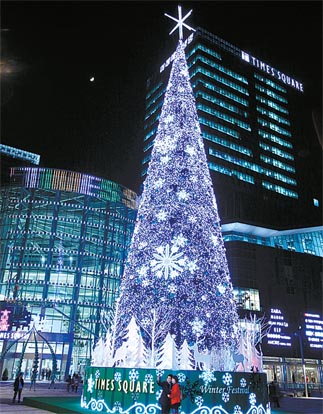 A large holiday tree has been set up in front of the Times Square shopping complex in Yeongdeungpo District, western Seoul. The tree is 33 meters (108 feet) high and is said to be the tallest in Korea. [YONHAP]

It’s been a tough year, but neither the economic slump nor the nasty flu virus can stop the winter holidays from approaching.

The city has come alive as the end of 2009 draws near, and many venues are gearing up for year-end celebrations.

Downtown streets, department stores, hotels and public plazas are all illuminated with twinkling lights, vibrant displays and colorful Christmas decorations, providing a perfect way to get into the festive spirit without spending much time or money. Holiday-themed ballets, plays and musical performances dominate the cultural scene this month, while theme parks are busting out the fake snow, Rudolph props and other decorations. If you want to escape completely, travel deals will get you to the tropics for an unusual type of holiday, or you can simply stop by area hotels for traditional Christmas meals.

Following are some ideas that will help you ring in the holidays.


Christmas on a budget

A great way to soak up the atmosphere is to take a walk around downtown Seoul, where you can encounter holiday cheer around almost every corner without spending a dime.

Most department stores are adorned with colorful decorations inside and out, part of their attempts to lure shoppers. Additionally, some have flashy displays that are loosely tied to Christmas. 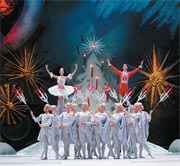 The Korea National Ballet will again perform “The Nutcracker” this year. Provided by the ballet company

This year’s theme at the Shinsegae Department Store in Myeongdong, central Seoul, is “The Wizard of Oz,” based on the hit U.S. movie and book about the magical journey of a young girl named Dorothy. The store’s outside walls are decorated with thousands of light-emitting diodes (LED) and large emerald-colored lanterns. The Lotte Department Store in Myeongdong has a circus theme ahead of the holidays, featuring decorations and installations in the shape of elephants and horses.

Other buildings and event areas have public displays as well. The outside walls of the Sejong Center for the Performing Arts and the KT building, both in the Gwanghwamun area, will transform into giant screens featuring a variety of images - some of them holiday-related - from Dec. 19 through Jan. 1. Seoul Plaza is erecting a giant Christmas display, while the new Times Square development has a towering tree.

Many people also celebrate the holidays by taking a spin on an outdoor ice rink. Perhaps the best place to lace up your skates is at the ice rinks in Gwanghwamun Square, which were relocated from their former location at Seoul Plaza. Starting Dec. 11, a total of three rinks will be open from 10 a.m. to 10 p.m. daily until Feb. 11. It costs 1,000 won (90 cents) for each hour, including skate rentals.


A night at the ballet

There are several performances that always come to town this time of year, among them one of the most famous: “The Nutcracker.”

This year, three different ballet troupes and one circus company are presenting the popular classic. 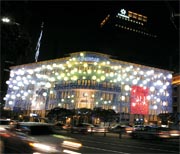 The fountain in front of the Bank of Korea and the Shinsegae Department Store in Myeongdong is illuminated with Christmas decorations. [NEWSIS]

“The Nutcracker is based on a story that happens on Christmas Eve, so the show is a perfect fit for the season,” said Kim Ye-na, a spokeswoman for Universal Ballet, which has been putting on the show since 1986.

Four different shows on the same subject might seem a bit too much, but each one tells the story in a different way and has its own choreography.

The Korea National Ballet will present the show from Dec. 18 to 24 at the Seoul Arts Center (www.sac.or.kr/eng/); the Seoul Ballet Theatre through Jan. 3 at venues in Suwon, Seoul, Yongin, Gwacheon and Daegu (www.ballet.or.kr); the Universal Ballet from Dec. 22 to 31 at the Universal Art Center in Seoul (www.ubcballet.com); and the circus company Cirque Nut through Dec. 31 at the Big Top Theater in Seoul Olympic Park (www.cirquenut.com). Tickets range from 30,000 won to 150,000 won ($26 to $130).


Music to the ears

A big part of the Christmas season revolves around traditional holiday songs, ranging from jingles to carols to classical pieces.

The Bambini di Praga choir will present several concerts in the coming week, filling the air with classics such as Mendelssohn’s “Laudate Pueri” in addition to Christmas carols from around the world. 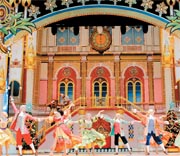 The 60-year-old choir is one of the top choral ensembles in the Czech Republic. This select group consists of young singers aged 12 to 20. It will mark the sixth time the choir has come to Korea since 1992.

Visiting an amusement park isn’t exactly a traditional way to celebrate the winter holidays. But it can be a great way to get into the spirit nonetheless, as they feature some of the biggest Christmas displays.

True to its motto of “Every day is a holiday,” the Everland theme park in Yongin, Gyeonggi, will open a “Christmas Avenue” today as part of its annual winter festival. The display of Christmas lights stretches 500 meters (1,640 feet) from the entrance of the park and includes numerous Christmas trees. 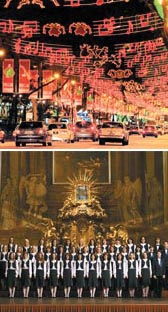 The streets of Singapore are decked out in Christmas lights. Provided by the Singapore Tourism Board. The Bambini di Praga choir will perform three holiday shows in Seoul. Provided by Seoul Arts Management

Since Christmas is not complete without plenty of powder, the theme park has six snow machines along the avenue. For more information, call (031) 320-5000 or visit www.everland.com.

Seoul Land in Gwacheon, Gyeonggi, is currently offering “Rudolph Rides” where guests can sit with Santa Claus in his sleigh, which is led by eight “reindeer” (ahem, donkeys). Each ride costs 2,000 won to 3,000 won. Seoul Land’s famous parade will once again feature various colorful Christmas performances as well. For details, call (02) 509-6000 or visit www.seoulland.co.kr.

Lastly, Lotte World in Jamsil-dong, Seoul, has several performances related to the holidays.


The travel industry is getting in on the game, too.

If you’d rather escape the chill and spend the holidays in warmer climes, Singapore’s main tourism organization has teamed up with 13 hotels to offer its “Christmas in the Tropics” package again this year.

As part of the promotion, guests who plan to stay at least four days can get a free night’s stay. For more information, check out www.visitsingapore.com.

Hotels here in Seoul have some winter holidays specials and attractions as well.

The W Seoul-Walkerhill, for instance, will offer a special brunch buffet on Christmas Day. The buffet, available from 11 a.m. to 3:30 p.m., will include honey-glazed ham, maple-roasted turkey and cranberry sauce. You can mix it up a little and get Alaskan crab and jumbo shrimp as well. The special costs 100,000 won.

For those who enjoy nightlife, the WooBar inside the hotel will host a party on Christmas Eve with exclusive performances and music by world-famous D.J.s. The entrance fee is 50,000 won. For more information, call (02) 465-2222 or visit www.whotels.com/seoul.

Also, the Grand Hyatt Seoul has reopened its outdoor skating rink for the holidays. The rink’s unique setting boasts commanding views of the Han River and an endless expanse of twinkling lights from the city below.