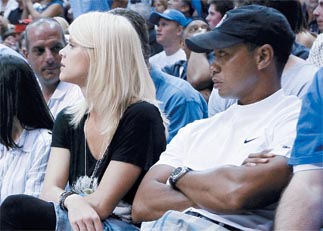 In this June 11 photo, Tiger Woods and his wife, Elin Nordegren, watch the fourth quarter of Game 4 of the NBA basketball finals between the Los Angeles Lakers and Orlando Magic in Orlando, Florida. [AP]

NEW YORK - Tiger Woods apologized Wednesday for “transgressions” in his family life as a magazine posted what it said was evidence of an extramarital affair between the golf superstar and a cocktail waitress.

“I have let my family down and I regret those transgressions with all of my heart,” Woods said, appealing for privacy after celebrity gossip magazines and tabloids reported on three women who claimed to have been his mistresses.

Woods did not directly respond to those reports, but his mea culpa sought to draw a line under a publicity disaster that has damaged the golfing great’s squeaky-clean and highly lucrative image. It came hours after the celebrity magazine Us Weekly posted an online recording of what it said was Woods begging Los Angeles waitress Jaimee Grubbs to change her voicemail to hide their affair from his wife, Elin Nordegren.

In the statement on his Web site, Woods admitted he was “far short of perfect” and said “I have not been true to my values and the behavior my family deserves.”

The star promised “to be a better person and the husband and father my family deserves,” but he also asked the media to leave him in peace. “Personal sins should not require press releases and problems within a family shouldn’t have to mean public confessions.”

The statement came five days after Woods crashed his car in strange circumstances on Friday at 2:25 a.m. outside his Florida home, where he lives with Elin, a 29-year-old former Swedish model, and their two children. There were no immediate signs of sponsors getting cold feet.

“Nike supports Tiger and his family. Our relationship remains unchanged,” the sportswear giant said in a brief statement.

But Woods remains in difficult territory, surrounded by an aggressive tabloid media. Rumors started soon after Friday’s crash when Woods refused to speak to police, fueling speculation that he had been fleeing Elin after she became violently angry at reports he was seeing a New York nightclub hostess.

On Tuesday, hostess Rachel Uchitel told tabloid newspapers she barely knows 33-year-old Woods and never had a sexual affair with him.

No sooner had that story been nipped in the bud when Us Weekly named Grubbs as another alleged mistress, quoting the cocktail waitress saying she had secretly dated the golfer for 31 months and met for sexual relations 20 times.

The magazine on Wednesday posted an online recording purported to be Woods urging Grubbs not to identify herself by name on her voicemail because he was afraid his wife was becoming suspicious. In the recording - which could not be verified - a man is heard saying: “Hey, it’s, uh, it’s Tiger. I need you to do a huge favor. Can you please take your name off your phone? My wife went through my phone and may be calling you.”

Meanwhile, Life and Style magazine has a report naming a Las Vegas club manager, Kalika Moquin, as a third alleged mistress. The only good news for Woods this week has been the decision by police not to file criminal charges over Friday’s crash.

Woods was issued Tuesday with a careless driving citation and faces a fine of $164 and four points on his license if convicted. Woods said his injuries will prevent him from playing in this week’s Chevron World Challenge in Los Angeles, an 18-star golf event to benefit his charity foundation. AFP