For Haruki Murakami, the surreal is often more real

For Haruki Murakami, the surreal is often more real 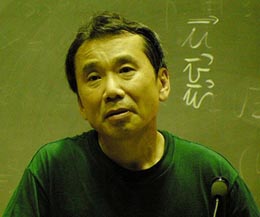 TOKYO - Haruki Murakami prefers to keep to himself, yet the Japanese author who is a regular favorite in Nobel literature prize predictions has been translated into more than 40 languages.

Murakami’s surreal style has won him fans worldwide, and his latest novel “1Q84,” his first in five years, became an instant best seller in Japan when it was published in May. The two-volume, 1,055-page book takes place in Tokyo in the year 1984. The title of the book is suggestive of George Orwell’s “1984,” as the Japanese word for 9 is pronounced like the English letter “Q.”

In a recent interview, the media-shy Murakami spoke about reality, religious cults and how the Palestinian-Israeli conflict concerns him.

A. First, there was George Orwell’s 1984, a novel about the near future. I wanted to write something that was the opposite of that, a novel on the recent past that shows how things could have been. I had this feeling that I wanted to re-create the past, rather than reproduce it. I am always doubtful about whether this world that I am in now is the real one. Somewhere in me, I feel there is a world that may not have been this way. It is a very eerie and scary story in a way, so I would be grateful if readers can think about why it is eerie.

How do you think readers will take the novel?

I think people are gradually starting to understand and accept the realness of unreal things. To me, Sept. 11 (2001) does not feel like an incident that took place in the real world. There must be a world somewhere that this didn’t happen. I think such a mood is shared by everyone, and that would help set the grounds for 1Q84 to be accepted.


Females are a powerful force in your stories.

I am a very slow learner... So it took me 30 years to move from a first-person narrative to one in the third person. After I started to write in a third-person narrative, it became much easier to write about women. Many of the women that I had written of were like a medium that linked the real and the unreal... At the same time, I am also writing very realistic and tough women, like (the heroine of his latest novel) Aomame. Recently, I think women are more interesting. I think girls are stronger, smarter and more interesting compared to boys.


Do you have complex dreams like those in your stories?

I hardly ever dream. Maybe I had them, but I don’t remember anything. When I wake up in the morning, it’s all gone. But instead, I can have dreams while I am awake - in other words, that is to write novels.


What are some issues you are currently interested in?

I am keeping an eye out on the Palestinian issue. I received the Jerusalem (literary) prize recently and I went around Israel. I strongly felt the sufferings of the Jewish people and the Palestinians in the land of Jerusalem. It must be difficult for both people of Palestine and Israel to live as individuals without belonging to one side, to one of the systems.


What’s your take on the Nobel and other literature prizes?

The most important prize for me is having good readers.