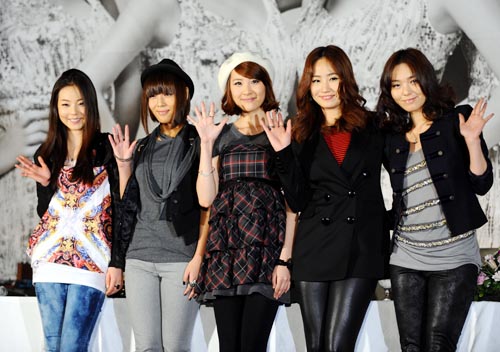 Members of the Wonder Girls, a Korean girl pop band under JYP Entertainment, recently ranked 72 on the U.S. Billboard charts, the first singers from Korea to make it that high. The group posed for this photo during a press conference at a cafe in Cheongdam-dong, southern Seoul, Nov. 23. [NEWSIS]


The Wonder Girls are set to appear on season six of the American FOX Network’s “So You Think You Can Dance” program on Dec. 9, along with the winner of “American Idol” season eight Kris Allen.

The pop group’s American debut single “Nobody” sold over 30,000 copies in the week of Oct. 11, earning the Wonder Girls the No. 76 position on the Billboard Hot 100, the first music group from Korea to debut on singles chart. The high sales probably owe much to the girl group’s first U.S. concert tour with the Jonas Brothers, which ended recently.

A staff member at the JYP Entertainment Agency said, “Wonder Girls has just successfully completed a concert tour in China, so they had to head straight to America for the taping of ‘So You Think You Can Dance.’”

Recently nominated for five Emmy Awards, “So You Think You Can Dance” holds open auditions for dancers, then picks 20 finalists. One of America’s top-rated reality shows, it airs globally in South America, Europe, Southeast Asia, South Africa and Australia, as well as in Korea.