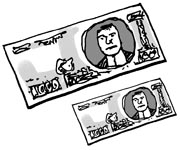 Emperor Nero Claudius Caesar Augustus Germanicus of Rome executed a currency revolution in 1964. He reduced the amount of the actual silver content in silver coins and the gold content in gold coins by 15 percent and 11 percent, respectively.

That allowed him to create even more money, and thus line his pockets. Roman emperors after him also adopted the “Nero-style” method of increasing their wealth.

He readjusted the value of the currency many times after that, but the situation did not get better, according to Jack Weatherford in “The History of Money.”

Redenomination, a method of readjusting the face value of a nation’s currency, is used as a solution to inflation.

In July of last year, Zimbabwe counteracted hyper-inflation - where the price of one piece of bread soared to 20 billion Zimbabwe dollars - by adjusting the currency value so that every 1 billion dollars counted as one. Last February, it was adjusted again to 1 trillion to one, erasing a whopping 12 zeroes.

Redenomination in Korea was conducted like a military plan. In February 1953 during the Korean War, President Syngman Rhee carried out the “100 won to 1 hwan” revolution. The Chief of Naval Operations transported the new money by warship.

Later, during the “10 hwan to 1 won” revolution executed by the chairman of the Supreme Council for National Reconstruction in June 1962 - when Park Chung Hee was president - the vice chief of the Korea Central Intelligence Agency and Cha Ji-cheol, captain of the special warfare command, were in charge of transporting the new currency. Soldiers who transported the boxes of currency thought they were moving military equipment.

Those two sudden currency revolutions were extremely shocking to society and were ultimately judged as failing to sufficiently stabilize inflation, according to Yoong Kwang-won in “Korean Money Impact.”

North Korea apparently recently executed a “100 to one” currency reform. There is an exchange limit, so the accumulated wealth of North Korean citizens could actually turn into meaningless pieces of paper.

Oswald Spengler, author of “The Decline of the West,” said, “Power is superior to currency.” Looking back on the many currency reforms conducted by powerful authorities, we can only agree. However, has power ever really trumped the instincts for survival and desires of the people?