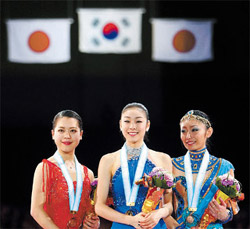 Kim entered today's free skating program trailing Miki Ando of Japan after placing second in the short program with a score of 65.64. With a solid performance tonight, Kim ended the final with a combined score of 188.86 points and placed ahead of Ando's 185.94, which was the Japanes skater's season best score. It was an all-Asian affair at the ISU Grand Prix this year as Akiko Suzuki of Japan finished third with a combined total of 174 points.

The 19-year-old Kim has been in peak condition this season after record-setting performances at the Trophee Eric Bompard in Paris, France and Skate America in Lake Placid, New York. Kim caps off the 2009-10 ISU season with a Grand Prix Final title after losing out to Mao Asada of Japan at last season's final in Goyang, Gyeonggi.
Kim and five other competitors at the ISU Grand Prix Final will perform in the Gala Exhibition tomorrow night.