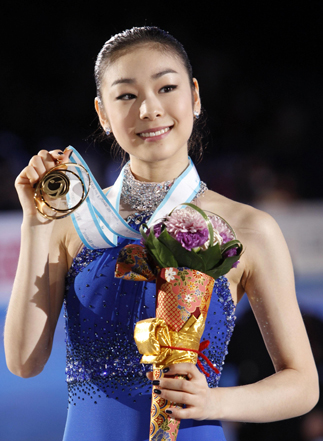 South Korea’s Kim Yu-na shows her gold medal during an award ceremony following the ladies free skate at the Grand Prix of Figure Skating Final in Tokyo on Saturday. [REUTERS]

Kim entered the free skate trailing Miki Ando of Japan after having placed second in the short program with a score of 65.64. Having failed to connect on a triple flip during her short program, Kim tweaked a triple lutz-triple toe loop combination during her free skate.

“When I made the jump, I felt the gravity of my body going forward, so I decided to finish the combination with a double toe loop to avoid a fall,” stated Kim to the press.

Kim also had a setback prior to the start of her routine. During the morning dress rehearsal, Kim’s skate blades knocked against each other during a practice jump.

“There was some damage to the left skate blade after a triple lutz in practice. We got it fixed, but it was not in perfect condition,” Kim said.

Despite the setbacks, Kim put on a solid performance and ended the final with a combined score of 188.86 points. The score was enough to surpass Ando’s total of 185.94, which was the Japanese skater’s best score of the season.

This year’s ISU Grand Prix was an all-Asian affair, with Akiko Suzuki of Japan finishing third with a combined total of 174 points.

The 19-year-old Kim has been in peak condition this season, and she has delivered record-setting performances at the Trophee Eric Bompard in Paris, France, and Skate America in Lake Placid, New York.

Kim caps off the 2009-10 ISU season with a Grand Prix Final title after having lost to Mao Asada of Japan at last season’s final in Goyang, Gyeonggi.

Kim and five other competitors wrapped up the ISU Grand Prix Final by performing in a gala exhibition yesterday.

Kim and coach Brian Orser will now focus on preparing for the 2010 Winter Olympics in Vancouver, Canada, in February. Although Korea has not yet fielded a gold-medal hopeful in figure skating, Kim is the clear favorite to take the top prize in Vancouver at this point.