A historic find, surrounded by controversy

A historic find, surrounded by controversy 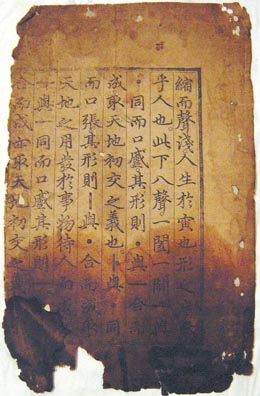 A sheet of the Hunmin Chongum Manuscript found in Sangju, North Gyeongsang. Bae Ik-gi revealed the piece to the JoongAng Sunday on Nov. 19. Bae refused to show the rest of the manuscript. By Lim Hyun-ook

Last year, the discovery of an alleged second copy of the Hunmin Chongum Manuscript sent shock waves around the country, especially among historians.

The manuscript, which promulgated the Korean alphabet, or Hangul, was published in 1446 by scholars in the Joseon Dynasty (1392-1910) under the rule of King Sejong (1397-1450). Hangul is considered one of the greatest achievements in Korean history.

The only known copy of the manuscript in existence was found in the 1960s and is now on display in the Kansong Museum of Art in Seoul. That copy, listed as National Treasure No. 70, is included in Unesco’s Memory of the World Register, which looks to preserve, disseminate and call attention to important older documents across the world.

The discovery of a second copy, therefore, ranks as an extremely important historical find. 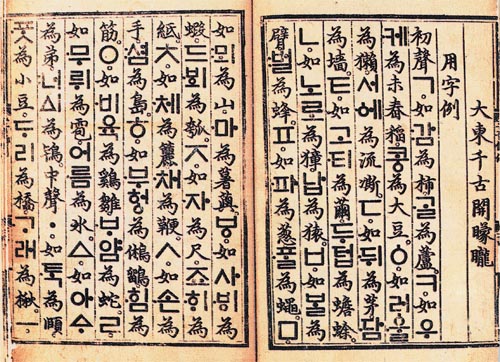 The Hunmin Chongum Manuscript, which is kept in the Kansong Museum of Art and is listed as National Treasure No. 70, has the same calligraphic style as the one found in Sangju. [JoongAng Photo]

But details surrounding who actually owns it are in dispute, and there’s no resolution in sight. Meanwhile, the second copy runs the risk of being damaged, as the controversy has delayed necessary procedures for its preservation.


Two sides to the story

In July of last year, Bae Ik-gi, a scholar with a specialization in classic Chinese literature, came forward with an astonishing claim. The 46-year-old said he found a second copy of the famous manuscript at his home in Sangju, North Gyeongsang. Bae claimed he stumbled upon the documents while his home was being repaired.

Just 10 days after the discovery was made public, though, 65-year-old antique dealer Cho Yong-hun claimed that Bae stole the manuscript from him. The two then sued each other, and a police investigation into the matter as well as a trial continues to this day.

During a hearing on Nov. 20, Cho said he sold Bae 50 books on July 26, 2008. At that time, Cho said, Bae stole the manuscript as well. Cho said the document was passed onto him from his ancestors but that he did not know it was a copy of the Hunmin Chongum Manuscript.

Not many people have had a good look at it.

Even when the discovery of the manuscript was aired on television in July 2008, only a portion of it was verified by reporters. The pages have all been torn out of the original binding for some reason, and no one outside of Bae has seen them in their entirety recently.

Lim No-jig, 48, a researcher at the Korean Studies Advancement Center who appraised the manuscript last summer, only saw two-thirds of it, while Nam Kwon-heui, a philology professor at Kyungpook National University, evaluated the document through video footage.

Still, both professionals say they are confident it is real.

“I was distrustful initially, but I was surprised to discover that it was actually published during the reign of King Sejong,” Nam said. “Although I only watched it on a screen, I saw two-thirds of it and there is no doubt that it was real. Hopefully, it will be open to the public as soon as possible so we can study it.”

The Hunmin Chongum Manuscript explains how Hangul was created and how to use the alphabet. It has 33 pages. Because the original one - which was discovered in Andong, North Gyeongsang - was printed with wood printing blocks rather than by hand, scholars have long believed that there was another copy. Nam, however, said only a limited number of the manuscripts were created, as the Korean language has evolved since Hangul was created in 1446. “The condition of the manuscript is even better than the one kept in the Kansong Museum of Art,” Lim said. “In particular, there is a short memo on the upper side of the pages, and it will greatly help study the history of the Korean language.”

The Ministry of Culture, Sports and Tourism and the Cultural Heritage Administration of Korea said that the manuscript still belongs to one of the two individuals and that there is nothing the government can do about it.

“Under the laws, the government can’t interfere with privately owned cultural assets,” said Roh Il-shik, director of the Korean language and culture department at the Culture Ministry. “The ownership of the Hunmin Chongum Manuscript found in Sangju is not clear yet. There is nothing we can do until the lawsuit over the ownership ends.”

Other entities have made attempts to see it as well.

“We asked Bae to show us the manuscript, but he has continued to refuse our requests,” said Oh Chung-young, a curator of the movable asset department at the Cultural Heritage Administration. “If it is enlisted as a cultural asset by the government, it is legally bound. But before it is registered, it is up to the individual. And the owner is not obligated to reveal it.”

Once a cultural asset is registered, however, carrying it out of the country and altering its condition become punishable by law. In addition, the owner of the asset will receive state aid in preserving it, and relevant authorities - such as the Cultural Heritage Administration - can check on the condition of the property. However, the registration can take place only after a formal appraisal of the asset.

When the JoongAng Sunday visited Bae’s residence in Sangju on Nov. 19, a banner hanging in front of his house read, “This place is where an artifact equal to National Treasure No. 70 was found and there will be consequences for illegal trespassing.”

In the yard was a pile of hundreds of old books and antiques, which Bae said he has been collecting for the last 10 years.

The letters on the sheet were legible, as if they had just been printed. However, the bottom of the page was dark brown. Asked whether the rest of the book is well maintained, Bae said, “I can neither give you an answer nor confirm anything.”

However, Bae said that Cho “is spreading word that the Hunmin Chongum Manuscript is in danger of being damaged just to pressure me, but I won’t give in.”

Indeed, the biggest concern over the manuscript is that while the lawsuit goes on, it could be further damaged by lack of proper care. And with both Cho and Bae saying they are willing to appeal if they lose the case, it’s unclear when the situation will be cleared up.

“Old books are vulnerable to moisture and there needs to be some preservation procedures taken,” said Kang Hyeong-tae, 55, head of the preservation science team at the National Museum of Korea.

Bae continues to keep a secretive net around the book, saying he fears the consequences of revealing too much.

“Once a cultural asset is found, people will not leave the founder of the asset alone,” he told the JoongAng Sunday. “I cannot show it to you because I can’t trust anybody.”

Park Byeong-seon, 82, a Korean bibliographer based in France, said he is disheartened by the situation. Park went to France in 1955 and found that the “Jikji,” the world’s oldest metal print, was in the National Library of France, which Korea previously didn’t know. There, he also found 297 of the books originally kept at Oegyujanggak, a state library that existed in Korea during the Joseon era.

He thinks something must be done quickly to preserve the Hunmin Chongum Manuscript.

“An important document should not be treated like this,” Park said.

Although France has similar laws that keep the government at bay when it comes to individual possessions, Park said officials there wouldn’t have let it get this far.

“The French government would have done something to stop the artifact from being damaged,” Park said. “Time is flying while the Korean government is just waiting.”