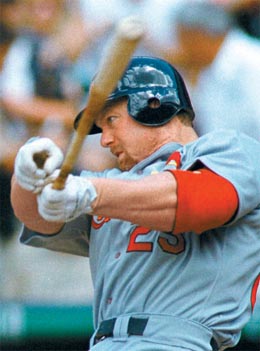 LOS ANGELES - Baseball star Mark McGwire said on Monday he used steroids during his record-breaking home run season in 1998, dealing another blow to the drug-tainted image of America’s national past-time.

In a statement that confirmed long-held suspicions about McGwire’s hitting exploits, the 46-year-old former Oakland Athletics and St. Louis Cardinals star said he used performance-enhancing products throughout the 1990s.

“I wish I had never touched steroids. It was foolish and it was a mistake. I truly apologize. Looking back, I wish I had never played during the steroid era,” McGwire said in a statement on the Cardinals Web site.

McGwire had consistently refused to comment on drug use in baseball and in 2005 refused to testify after being ordered to appear before a congressional hearing on steroid use in the sport.

The burly slugger captured the imagination of American sports fans in 1998 after becoming involved in a gripping head-to-head battle with the Chicago Cubs’ Sammy Sosa to break Roger Maris’s coveted single season home-run record. Maris’s mark of 61 had stood since 1961 but was obliterated by McGwire, who finished the 1998 campaign with 70 home runs. Sosa finished with 66.

However, questions marks have swirled about the legitimacy of McGwire’s record-breaking season for years, which the shamed baseball star admitted on Monday was fueled by illegal drugs. McGwire said he had decided to come clean after being appointed the Cardinals hitting coach.

“I never knew when, but I always knew this day would come,” McGwire said. “It’s time for me to talk about the past and to confirm what people have suspected. I used steroids during my playing career and I apologize.

“I remember trying steroids very briefly in the 1989/1990 offseason and then after I was injured in 1993, I used steroids again. I used them on occasion throughout the 90s, including during the 1998 season.”

McGwire said he had been drawn to steroids after becoming convinced they would help him recover from a series of injuries.

“During the mid-90s, I went on the [disabled list] seven times and missed 228 games over five years. I experienced a lot of injuries, including a rib cage strain, a torn left heel muscle, a stress fracture of the left heel, and a torn right heel muscle.

“It was definitely a miserable bunch of years and I told myself that steroids could help me recover faster. I thought they would help me heal and prevent injuries too.”

McGwire acknowledged that his hitting feats would forever be questioned following his admission of steroid use, but insisted that he had enjoyed “good years” when he had been clean.

“I’m sure people will wonder if I could have hit all those home runs had I never taken steroids,” he said.

“But no matter what, I shouldn’t have done it and for that I’m truly sorry.” AFP