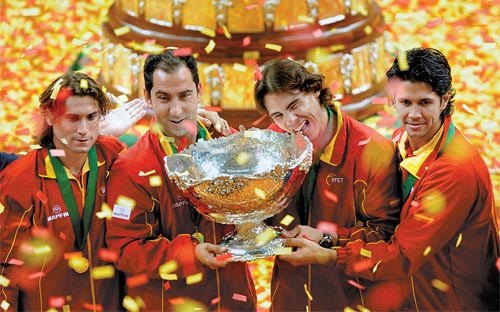 From left, Spain’s David Ferrer, Albert Costa, Rafael Nadal and Fernando Verdasco hold the Davis Cup trophy to celebrate the end of the Davis Cup final against Czech Republic in Barcelona, Spain, on Sunday, Dec. 6. Spain lifted the Davis Cup for the second straight year after completing a 5-0 victory in the final. [AP]

BARCELONA - Spain’s depth of talent and growing appetite for Davis Cup success mean the only team that could have given them a real run for their money in this year’s final would have been “Spain B.”

The hosts completed a 5-0 victory over the Czech Republic with singles wins from Rafael Nadal and David Ferrer on the indoor clay court at the Palau Sant Jordi on Sunday, putting the icing on a fourth Davis Cup triumph in nine years.

They are the first team to win back-to-back titles since Sweden in 1998, and as long as their players remain committed to the competition there is every reason to suppose the Davis Cup team of the decade will extend their dominance.

“To win the Davis Cup four times in nine years just says everything,” Czech No. 1 Radek Stepanek told reporters after his defeat in Saturday’s doubles had sealed Spain’s win.

“You have a huge amount of players and tennis centers, and there’s always someone coming up. The toughness and the team are so strong that you could even build a second team almost as strong.”

The numbers back up Stepanek, with Spain boasting nine top-50 players at present. Albert Costa had the luxury of resting world No. 9 Fernando Verdasco to keep him fresh for the doubles alongside Feliciano Lopez. In fact, the hardest decision the captain faced was who to leave out. Juan Carlos Ferrero, like Costa a veteran of Spain’s breakthrough triumph in 2000, played quarter-finals and semi-finals this season but found himself relegated to practice partner here, as did Tommy Robredo.

Nadal, still only 23, is clearly the leader, but the Spanish team showed when he was injured at the end of last year and again this season that it can easily cope without him. Gone too are the days when Spain would succumb at the first sign of a blade of grass or a thread of carpet. While three of their four Davis Cup successes have come on clay, they won last year’s final away in Argentina on hardcourt.

It is not just the depth of talent that makes Spain such formidable opponents. The players all speak about how much they value playing for their country and each other in the Davis Cup, as for most of the year the sport is all about individual achievement, ranking points and prize money.

There is a real camaraderie that is evident in their post-match news conferences and body language out on the court.

“We are all very good friends and that counts for a lot,” Nadal said in the glow of victory on Saturday. “And we always make ourselves available because we love representing Spain.”

The task now is to prove the final victory over Argentina last year was no one-off, and that they can transfer their home-court dominance to other surfaces anywhere in the world. They will begin the defense against Switzerland - with the prospect of Nadal playing Roger Federer - and could face a testing trip to France in the following round.

“There are no limits to what this team can achieve,” said captain Costa, who has yet to talk to the Spanish federation about continuing next year.

“They’re young, there’s a great atmosphere in the camp and they are committed. If they maintain their motivation there could be many more Davis Cups on the way.”