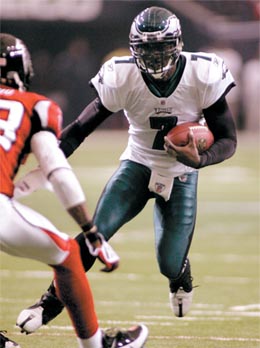 Philadelphia Eagles quarterback Michael Vick (No. 7) runs for yardage against Atlanta Falcons safety Thomas Decoud in his first game back to the Georgia Dome against his former team during their NFL football game in Atlanta, Georgia, on Dec. 6. [REUTERS]

Vick scored on a five-yard run in the third quarter and threw a five-yard touchdown pass in the fourth quarter for Philadelphia in a 34-7 victory at Atlanta, drawing cheers from the same crowd that had welcomed him with boos.

“I can’t be more thankful,” Vick said. “I was overwhelmed by the crowd’s reaction. I’m so glad I had a second chance. It was awesome. I will never forget this day. This is one moment I’m going to savor forever.”

It was the 11th time that Vick ran and threw for a touchdown in the same game and his first two trips into the end zone since fulfilling a prison sentence for his role in a dogfighting ring.

“I’m proud of Michael for going in and doing the things he did and keeping his composure at an emotional time,” Eagles coach Andy Reid said. Vick has played a limited reserve role as a backup quarterback for the Eagles this season after being released from federal prison for financing the canine gambling operation.

Exposed details of animal cruelty by Vick - including slaying of dogs through such methods as beating, drowning and electrocution - have brought an apology and speeches to youth groups by Vick.

“My goal was to get the crowd on their feet and let them know I miss them too,” Vick said. “I knew it would be 50-50. I totally understand.”

Hurting Falcons fans who dreamed of a first-ever Super Bowl behind Vick’s run-pass skills took out their anger when he came onto the field, booing him on runs of 3 and 4 yards for Philadelphia on the Eagles’ first drive.

But in his first appearance of the second half in place of Eagles starter Donovan McNabb, Vick received the ball on a direct long snap and ran up the middle, diving into the end zone for his first touchdown since last scoring for the Falcons on Oct. 15, 2006.

“It was a great feeling to get into the end zone. It was as if time stopped on that play,” Vick said. “When I scored that touchdown, the entire bench was halfway onto the field [to congratulate me].”

Vick connected with Brent Celek on a 5-yard touchdown pass with 2 minutes 29 seconds elapsed in the fourth quarter, completing an emotional return with the best day yet in his comeback, prompting Falcon fans to chant “We want Vick.”

“As loud as it gets in the stadium, it sent chills down my spine,” Vick said. “It was nice to hear that people are willing to give me a second chance.”

Many spectators wore Vick’s former Falcons jersey or new Eagles jersey, both bearing the No. 7, a tribute to a player who hopes to reverse the enmity he aroused for his past actions.

“I want this to be an inspiring story,” Vick said. “Things may happen but you have to persevere, make strides week in and week out. I have the fortitude to more forward. That’s what I want our youth to know, that if they keep moving forward good things will happen. I’m going to keep working until I become one of the best quarterbacks in the league again.”

Former teammates greeted Vick warmly, including hugs from Todd McClure, his former center with the Falcons, and Atlanta receiver Roddy White. Vick served as a captain for the game and was on the field for the opening coin toss.

“Everybody felt it and rallied around him,” Reid said. “Fans in general calling out his name at the end there, I’m proud of them for giving him a second chance.”

Reid said he had no special advice for Vick on how to handle the homecoming, but Vick revealed the coach had predicted Vick’s two-touchdown performance.

“Patience is everything. Timing is everything,” Vick said. “Andy told me at the beginning of the week I was going to score two touchdowns. It couldn’t have happened at a better time. Who cares what happened in the past?”