From ‘The Big Apple’ to big sales

From ‘The Big Apple’ to big sales 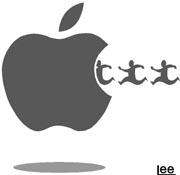 New York City’s nickname is “The Big Apple.” The origin of the nickname has many theories. But one explanation - now discredited - was that when some people in New York called a pretty French mistress of a saloon “Eve,” she called her employees “my irresistible apples.” The theory was that when word of these nicknames spread, people started to identify New York with the apple.

Although it is not clear who first called New York The Big Apple, it was John Fitz Gerald, a reporter of the New York Morning Telegraph in the 1920s, who popularized the slogan. One day, he heard horse keepers from New Orleans say that “the New York racecourse is a big apple that all jockeys envy.” After that, he started to use the expression often.

In the 1930s, New York was full of apples. It was because the streets were packed with between 5,000 to 6,000 apple peddlers. They were the unemployed who lost their jobs due to the Great Depression. They would buy a box with 72 apples in it from a wholesaler and then sell each apple for five cents, turning a profit of about $1 for each box sold.

Even securities companies gave their employees holidays so that they could sell apples on the streets when their income dropped rapidly. They called the work leave “apple days.” Perhaps it was because of the disheartening memory of apples that people rarely used the expression “big apple” during the 1950s and 1960s. It was revived only in 1971 when New York City started calling itself The Big Apple and tried to attract tourists. The corner of Manhattan where John Fitz Gerald once lived was renamed the “Big Apple Corner” in 1997.

Even if we do not count The Big Apple of New York, I think there is no fruit that appears in history more often than the apple.

For Korean people, too, there was an unforgettable “apple that led to a massacre.” When the Great Kanto earthquake struck in 1923, the Japanese - who believed falsely that Koreans were taking advantage of the disaster to commit arson and attack the Japanese - stopped ethnic Koreans and asked them to pronounce the word “apple” in Japanese. If they could not pronounce it in the Japanese way, they pulled them away and killed them.

On Nov. 28, there emerged yet another apple in the Korean market. This time, it was Apple’s iPhone, which uses an apple with a bite taken out of it as its logo.

It is reported that, including the number of phones ordered, some 65,000 iPhones were sold in a week.

The demand for iPhones in the Korean market is so strong that it looks as if it will attract consumers endlessly as New York, The Big Apple, attracts tourists. Even Korean consumers, who are reputed to be particular about new products, seem to find it difficult to resist the temptation to buy an iPhone.