Comedienne does more than make ’em laugh in ‘Hairspray’

Comedienne does more than make ’em laugh in ‘Hairspray’ 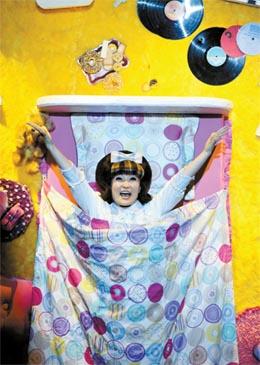 Comedian Park Kyung-rim stars as Tracy Turnblad in the Korean production of the Broadway musical “Hairspray,” which runs through Feb. 7 at the Kepco Art Center in Seoul. Provided by Seensee Company

Korean entertainer and comedian Park Kyung-rim is one of the last people you’d expect to see starring in a musical. Her throaty voice and average looks are not qualities casting directors tend to look for. But as one of three performers playing the leading role of Tracy Turnblad in the Korean production of the Broadway musical “Hairspray,” Park received a long ovation on the day of her debut in the role on December 2.

Park first saw the musical when she was studying in the United States in 2003, and said she felt an instant affinity with the main character.

“I first saw the Broadway version of the musical and just fell in love with the character of Tracy,” the entertainer said.

Park later found she had a lot in common with the character. Like Tracy, Park is not exactly a knockout, and like Tracy she has made a name for herself in show business with her positive personality and lively stage presence.

“The thing I liked most about Tracy was that she is always so optimistic,” said Park. “When people told me that I couldn’t sing because of my husky voice, I worked very hard to prove just how wrong they were.”

Tracy Turnblad is a small town girl from the city of Baltimore who just loves to dance and sing. She doesn’t have the physical attributes of a television star, but that doesn’t stop her from auditioning for a TV dance show and being cast as a regular. She not only makes it as a dancer as she always dreamed, but also grabs the attention of Link Larkin, a pretty boy with the nickname “little Elvis.”

Park revealed that she practiced nine hours a day, working on her acting and dancing skills for a month and a half and on her singing for over three months to prepare for the role.

“My close friend Lee Soo-young [who is also a popular singer] helped me improve my singing by spending countless nights in the noraebang [karaoke room] with me,” Park laughed.

The routine of long rehearsals and vocal training is actually not new to Park. In addition to her work as a comedian and television MC, Park has also appeared as a singer. In 2002, she released an album titled the “Parkgote Project” to raise awareness about childhood cancer. All of her efforts, from her voice lessons to the release of her CD and her concert performances, were filmed for the SBS-TV program “Beautiful Night.” The program, and the album, was an instant sensation and she later went on a nationwide tour to promote the project.

“I wanted to give hope to sick children like Tracy does when she helps fight discrimination against African-Americans in the 60s,” said Park. “If a person like me can sing and dance on stage, anyone can do anything.”

As Park says, the musical is not all about having fun and doing the shimmy; it deals with the social problems that people faced during a turbulent period in American history. Tracy helps bring everyone together despite the racial tensions they face with her warm heart and the help of her African-American classmates.

When asked how doing a musical is different from her regular performances on TV, Park answered, “It’s not that different for me, but I think it’s just the way the audience views me that is different. People have a certain preconception about me singing, even though it’s obvious that I can’t be better than professional stage actors and actresses. However, I do want to show that I gave it my best.”