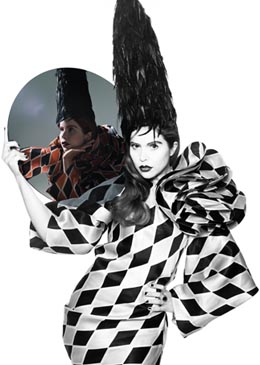 Paloma Faith recently released her debut album “Do You Want the Truth or Something Beautiful?” Provided by Sony Music Korea

Few musicians have a resume as colorful as that of Paloma Faith, a 24-year-old London-born singer who recently stunned the pop world with her debut album “Do You Want the Truth or Something Beautiful?”

She has been a magician’s assistant, a performer in burlesque shows and a sales assistant at a luxury lingerie shop. Speaking fluent French, Spanish and Italian, this half Spanish and half British musician is also an alumna of Central St. Martin’s College of Art and Design with a master’s degree in theater direction, and she recently starred in the new Terry Gilliam film “The Imaginarium of Dr Parnassus.”

Meanwhile, comparisons to Amy Winehouse, Duffy and Bjork have critics watching her moves closely. Add to all that her impeccable performances, extraordinary voice and idiosyncratic persona, and you get music transformed into art, Faith-style. The JoongAng Daily recently conducted an e-mail interview with the artist.

Q. You wrote all the songs for your album. What has been your biggest inspiration?

A. I think what I am inspired by is a kind of nostalgia and hopefulness from the past. I feel like that gets lost in contemporary culture. I hope to revive that, and to give the listener something to escape from, like an escape within, as opposed to being a reminder of the present.

You have shown a range of talents, including dancing and acting. How do they factor into your singing career?

I was trained as a performer from a young age. I started to dance ballet when I was four. I have always been a performer but I didn’t really do it seriously in music until like six or seven years ago. I always sang, but I didn’t ever sing in a professional way. So it’s kind of strange that I came to it very late in music. [Performing is] what saves me because it gives me confidence on stage, to pretend I think I am good.

I’ve only been to Japan - Kyoto and Osaka. [There was] the Cherry Blossom Festival so [it was] really beautiful. I have always wanted to go to China. And I’d love to go to Hong Kong. My stepfather is actually originally from Hong Kong, although he was born in England. But I always was brought up celebrating Chinese New Year, so I always had Chinese culture in my life. Also, when I was a kid, we used to go every Sunday for dim sum.

I heard that you are also a fan of Korean film director Park Chan-wook. What is it about him and his films that appeals to you?

I admire queens of tragedy like Edith Piaf and Billie Holiday, and the filmmakers Wong Kar Wai and Terry Gilliam.

Park Chan-wook is also one of my favorite filmmakers. The film [directed by Park] that I watched was “Old Boy.” It made me quite disturbed really, I was pretty impressed.