The 3-D science-fiction film “Avatar,” which opened in local theaters yesterday, has generated a good deal of buzz in the months leading up to its release. Not only is the film the latest work by James Cameron, the director of the Oscar-winning 1997 movie “Titanic,” it also has a price tag rumored to be close to $500 million and it was about 14 years in the making.

But what audiences are waiting for is the unique cinematic experience promised by the film. Avatar employs a range of state-of-the-art special effects, including “emotion capture,” which takes the existing “motion capture” technology to the next level of animated expression.

With emotion capture, a subminiature camera is affixed to the actors’ heads and captures their facial expressions and even the slightest movements in real time.

The movie Avatar takes the audience on a journey to a virtual far-off planet called Pandora. In the story, set in 2145, ex-marine Jake Sully (played by Sam Worthington), who is paralyzed from the waist down, is recruited by a corporation on Earth and sent to Pandora to work with botanist Dr. Grace Augustine (played by Sigourney Weaver) as part of the Avatar program. 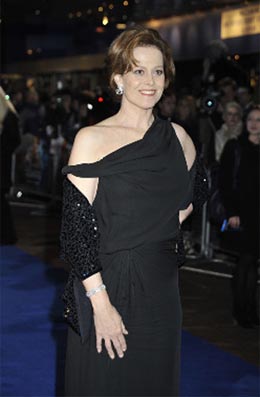 Sigourney Weaver appears at the world premier of the new film “Avatar” in London last Thursday. Provided by Fox Korea

The program involves the creation of an “avatar,” a remotely controlled biological hybrid that is genetically engineered from human DNA mixed with DNA from the Na’vi, the native, humanoid population on Pandora. By inhabiting his avatar body, to which he can have his consciousness linked, Jake is able to walk again. Then, he is instructed to infiltrate the Na’vi community to take a precious mineral believed to be the key to solving Earth’s energy crisis. However, Jake falls in love with a female Na’vi, Neytiri (played by Zoe Saldana) and becomes part of their community. This leads him to become entangled in an epic battle against his own people, the humans who are trying to colonize the world he has grown to love.

With what seems to be a mediocre plot in comparison to its first-rate visual effects, it still remains to be seen whether the film will truly change the landscape of cinema as many expect.

However, Weaver, one of the leading actors in the movie, believes that Avatar is a groundbreaking film and that more than any of Cameron’s previous blockbusters, it will have a profound impact on the future of film.

“Avatar is going to take everyone to Pandora,” Weaver said in a recent interview with the international media. “Audiences are going to smell it and feel it and be there. I can’t believe a film can do this but that is what it does. As actors making this film, we’re all aware that we are part of something that’s going to have a huge impact on cinema, without question.”

This is Weaver’s second collaboration with Cameron, after the 1986 sci-fi film “Aliens,” where she played Ellen Ripley. It was a career-defining role that turned her into Hollywood’s first genuine action heroine.

Following are excerpts from the interview, in which she revealed her thoughts about Avatar as well as about reuniting with Cameron to star in another alien movie - albeit on a much larger scale this time around.

Q. What was it like working with James Cameron again?

A. I found it less intense than in Aliens, maybe because we’re both older now. He was much more relaxed this time; he was like a kid in the candy store. It has been such an adventure and I think because I did work with him before, it was wonderful. I know him well. We picked up where we left off, except I think he’s merrier now; he’s happy, he has kids and a family and he was so excited about working on Avatar and working with each of us.

What was the most challenging aspect of the work for you?

The challenging part was the motion capture work. We did have to pretend it was Pandora because we were acting on an empty stage. We had to use our imaginations. It is all about being very specific because you might just have a stick or a feather to react to.

How are aliens (the Na’vi) presented in this movie?

Well it is interesting because I think every decade, our view of what aliens are changes. Jim said an interesting thing: that science fiction is the study, the exploration, of what it is to be human. In our movie, the “aliens,” that is, the Na’vi are the people one can learn the most from. I do think it goes along with the whole underlying environmental message in the movie, which is all about respect for different species and respect for nature and respect for what we don’t know and don’t understand. It is a wonderful mythology that Jim has created.

What do you think the theme of this movie is?

I think it’s a story about a young man who comes of age and who finds something to fight for. It is a great love story and it’s the story of a modern conflict. It is a conflict between what you love, what you have to do and what you believe in versus what people are telling you to do. So it’s a very rich story with creatures and places and huge battles.

There is nothing modern and cynical about this story. In many ways it reminds me of my favorite classic films. I used to love the feeling of settling into my seat in the theater and then it would say: “David Lean Presents” or something like that and you would know that you were going to a place that would be extraordinary and that something was going to happen to you that you would be thinking about for days to come, and I feel like Avatar is that kind of movie.

What does this film mean to you? It sounds like it had a major impact on you.

This film has certainly changed my understanding of what filmmaking is and what filmmaking can do. Also, it is just a big adventure story. No matter how many movies you have seen in your life, no matter how sophisticated you are, you watch this film and sense that we’re stepping over a threshold into a different way of making a movie, a different kind of experience.