Artifacts in an unlikely place

Artifacts in an unlikely place 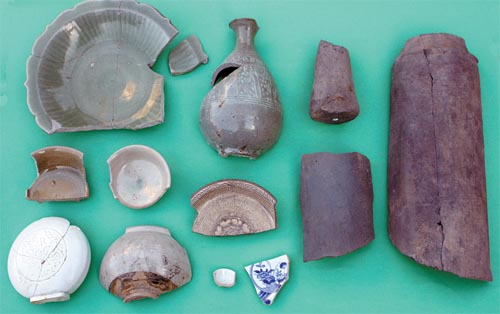 Plates, jugs and other artifacts were recently excavated at a site near the Korea Press Foundation building in central Seoul.

On any given day, crowds of people can be seen checking out famous downtown attractions such as Deoksu Palace, Namdaemun Gate and the Sejong Center for the Performing Arts. 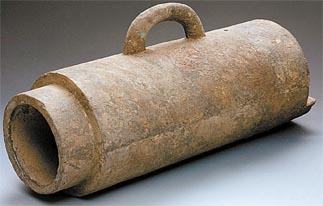 A bullangi japo, part of a cannon used hundreds of years ago, was also found at the site.

But few visitors pay much attention to the Korea Press Foundation, which blends in with the hundreds of other tall buildings in central Seoul.

But a site just behind this structure, which is nestled between City Hall and the Finance Center building, has been garnering a lot of interest recently from historians - more for what’s below the ground than above it.

Researchers have uncovered a handful of historical treasures next to the press building, many of which date back several hundred years to the time of the Joseon Dynasty (1392-1910).

This past June, Shin Suk-jeong, the director of the Korea Cultural Properties Investigation & Research Institute Association, carried out an excavation at the site and found many artifacts, including large arrowheads, European cannon parts and other weapons that required gunpowder.

These finds are considered very valuable to the study of Korean firearms history and could shed more light on how and when these weapons were used.

Three similar pieces were found nearly three decades ago and together rank as National Treasure No. 861. Until now, no other items like them had been found in Seoul since then.

“The pieces that make up National Treasure No. 861 were found in a pile of dirt in a subway construction site at Mokdong, western Seoul in 1982,” said Korea Army Museum Vice Curator Kim Sung-hye. “This is the first time more of these relics have been discovered. They will give us more insight into Korea’s artillery from the past.”

An inscription on the cannon details how much it weighed. [JoongAng Ilbo]

In a city where history and culture run deep, these types of historic time capsules are slowly revealing themselves as Seoul’s landscapes continue to change.

At the press building, researchers found something called a bullanggi japo, the main part of a type of cannon used during the Joseon era. This cylindrical artifact was made during the same time period as a similar cannon piece that Korea has deemed National Treasure No. 861.

The inscription on the recent find reveals that the cannon part was made by Kim Suk-hyeon in 1563, during the reign of King Myeongjong.

This type of cannon was modeled after ones found in Europe. They were much easier to load and fire than the artillery Korea had used up to that point.

The cannon quickly became a favorite of the Korean military and stayed that way for a long time.

Koreans first heard about this form of weaponry during the early 1500s from interpreter Yi Sok, who returned from a trip to China and reported his findings to the king.

The name bullanggi derived from the Chinese folangchi, which literally meant European, and at the time was primarily used to describe the Portuguese.

The weapons were made in several West European countries, including Portugal, during the 15th century. They eventually made their way to Asia when trading vessels from Europe reached Canton, China around 1517 and first appeared in Korea shortly thereafter.

The find near the press center building indicates that the site perhaps once housed a building that manufactured or stored weapons. Aside from the cannon piece, rifles were found in clumps and piled on top of each other in an underground heating system of a one-story building located at the site.

“It was impossible for the average person to own these types of weapons,” said Lee Myeong-yeob, a research supervisor at the Korea Cultural Properties Investigation & Research Institute Association. “So it is presumed that the site these weapons were found at was originally the annex of a government organization that was in charge of manufacturing weapons.”

In addition to these precious finds, researchers also unearthed many bowls and artifacts with the words “Nae Sum” - possibly referring to the person who made or owned the bowls - engraved on them.