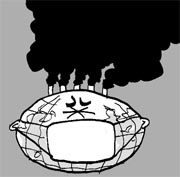 After the invention of the movable type printing press by Gutenberg, the most popular item sold was not the Holy Bible; it was the indulgence. With the blessings of clergymen, even people who committed crimes were able to avoid the sufferings of this world and the eternal fires of hell, if only they paid some money. Indeed, indulgences sold out as soon as they were printed.

An indulgence for the modern era has emerged, and this one ostensibly forgives the sin of carbon dioxide emission. The so-called carbon-offset system demands investment in environmentally friendly projects to compensate for the excessive emission of carbon dioxide. They are mainly bought by people who travel on airplanes, which emit more carbon gases than other forms of transportation. In addition to airfare, they pay $10 to $40 more for apparently contributing to planting trees in Africa and constructing hydroelectric power plants in Brazil. Thanks to the demand spurred by people’s desire to rid themselves of a guilty conscience, the amount earned from the carbon-offset system worldwide has reached a couple million dollars.

But there are strong criticisms of the system, which is also known as carbon credit or cap and trade. As the indulgence in the Middle Ages allowed people to commit crimes and still have peace of mind, the carbon-offset system also encourages people to travel more frequently and consume more.

Environmental specialists point out that emissions trading, which has been partly regulated since 2005 by the Kyoto Protocol, simply exacerbates global warming.

James Hansen, a climatologist at NASA in the U.S., lamented to the Times of London, “They are selling indulgences there. The developed nations want to continue basically business as usual so they are expected to purchase indulgences to give some small amount of money to developing countries. They do that in the form of offsets and adaptation funds.”

The United Nations Climate Change Conference, which includes the 15th Conference of the Parties to the UN Framework Convention on Climate Change, opened its plenary session in Copenhagen on Monday.

I sincerely hope that discussion on complementary measures on the problems pointed out so far will be taken as seriously as the expansion of emissions trading. Even if excessive gas emissions are masked by the indulgence of cap and trade, the earth will take its revenge though a climatic catastrophe.