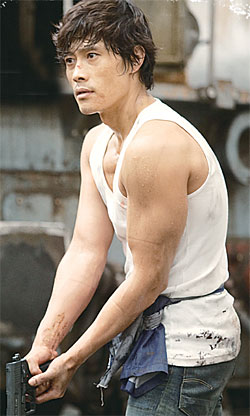 Lee Byung-hun, one of the stars of the KBS action drama "Iris," will go to court to defend himself from a lawsuit brought by Kwon Mi-yeon, a Canadian-Korean rhythmic gymnast who is suing Lee for alleged physical and mental suffering due to Lee's false promises of marriage. Kwon is seeking 100 million won ($87,000) in compensation.

Kwon claims to have met Lee in Canada in 2008 during a promotional tour for the movie "The Good, The Bad and The Weird," and to have maintained contact with him since.

After a Japanese-Korean businessman and friend of Lee's offered to pay for her to move to Korea, Kwon said she left Canada and lived in an apartment in Jamsil-dong, southern Seoul before being forced to move out after just three months. Kwon claims that Lee's attitude changed after she moved to Korea and that she was ignored after being given money to live in an apartment in Bongcheon-dong.

A press release yesterday from Lee's management agency, BH Entertainment, revealed that Lee will file a countersuit for libel against Kwon.